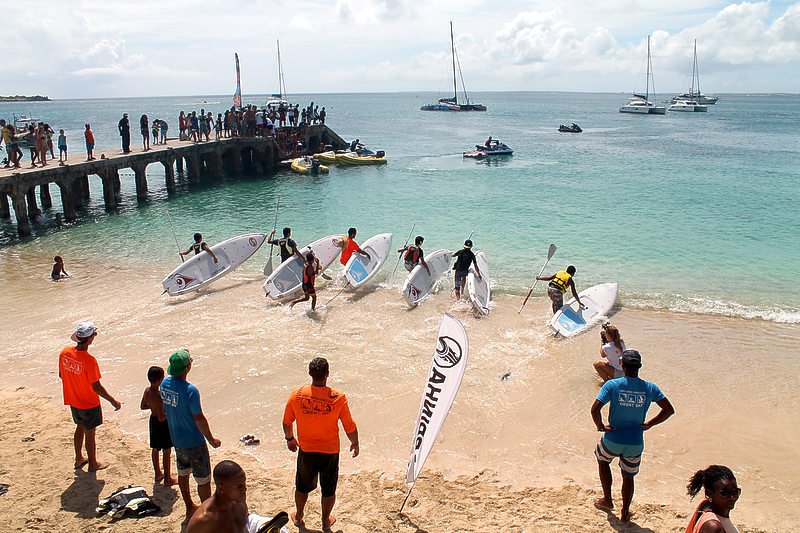 MARIGOT–President of marine trades association Métimer, Bülent Gülay, said Sunday the seventh edition of Fête de la Mer held on Grand Case Beach over the weekend is on course to show a substantial increase in participation of water sports activities.

Exact figures of proceeds from the two-day Fête, breakdown of figures of numbers of persons taking part in each activity, and which activities were most popular, will not be tallied until this week, however.
Gülay estimated Saturday was already 40 per cent up on last year and by 1:00pm on Sunday numbers were on a par with Sunday last year at the same time, with still four hours to go.
“Last year it was 3,000 activities purchased but this year I think we will be closer to 4,000 for both days,” he predicted. “Instead of people coming all in one go, we’ve had a steady stream of people all day and that makes a difference.”
The sea festival organised by Métimer invites the population to discover a range of water sports activities at inexpensive prices. Each of the 20 or so activities or excursions corresponds to a number of tickets that have to be redeemed. The tickets are purchased in advance on site.
In addition to trying out paddle boarding, windsurfing, sailing, jet skis, kayaking, Hobie cats and the like, excursions on a catamaran and Seaworld Explorer were also on offer.
Seaworld Explorer which takes 30 people at a time proved to be very popular, Gülay noted.
For the first time this year there was a mermaid show and initiation organised by the mermaid school in Anguilla and the association Tous a L’O that runs the floating swimming pool at Le Galion gave demonstrations of water dancing to techno music and aqua gym. Flyboard demonstrations have also become a regular staple at the Fête.
Commentators David and Erwin kept the show moving, informing the public in English and French on the activities and departure times of excursions. Some 60 volunteers are needed to run the Fête.
“People are now accustomed to us organising this Fête every year, so it’s getting more popular,” Gülay said. “It’s unique because nowhere else in the Caribbean has a sea festival like this. It’s a successful formula for everyone because everything is organised close to the beach between the two jetties which allows us to keep an eye on everything in terms of security and safety.
“You can see the fun all the kids are having in the water; it’s a perfect day out for the whole family. And all the “lolos” benefit from the extra restaurant business.”
Métimer has chosen to financially support young people in international nautical competitions with proceeds from the Fete. The four represent windsurfing, surfing, kitesurfing and water skiing. Last year sea rescue service SNSM was the beneficiary.
Gülay disclosed the tourism boards of Anguilla, St. Barths, and St. Eustatius have agreed to publicise the Fête on their respective islands next year.