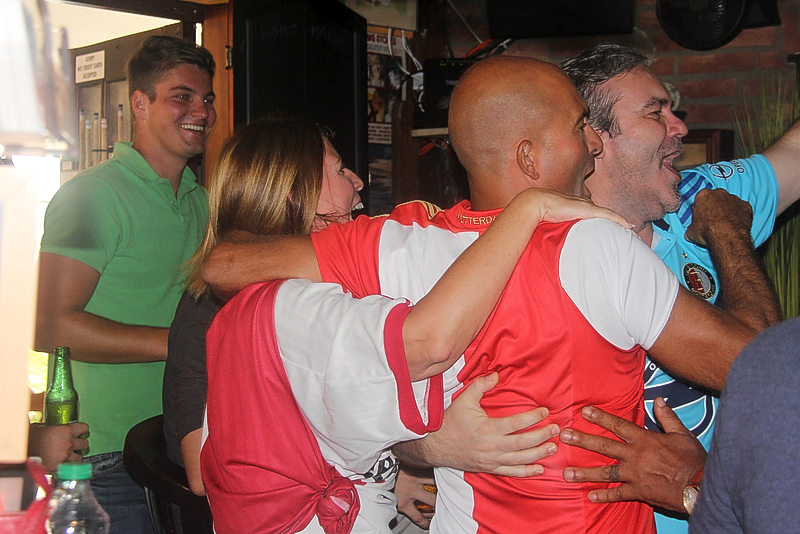 MADAME ESTATE–Fans of Dutch soccer club Feyenoord gathered at Café Rembrandt on Sunday morning to cheer their favourites on in clinching the fifteenth Dutch title, following their club’s last success in 1999.

Feyenoord won the championship, with a one-point advantage over arch rival Ajax, after veteran striker Dirk Kuyt scored a hat-trick in a 3-1 home win over Heracles Almelo.

Some Ajax fans also gathered at Café Rembrandt in front of an outdoor screen to see their team winning 3-1 away at Willem II. They loudly cheered as Ajax took a 2-0 lead over Willem II Tilburg, hoping that Feyenoord would drop some points. Any hopes the Amsterdammers may still have had, were quickly quelled as Kuyt, Feyenoord’s 36-year-old captain, scored after 40 seconds to set the Rotterdam side on their way to the win they needed for a first title in 18 years.

The early goal put the Feyenoord fans in a good mood as they quickly took possession of the two big indoor screens, ordering their first beers of the day.

Feyenoord, coached by former Arsenal and Barcelona player Giovanni van Bronckhorst, had a chance to secure the championship last week, but were surprisingly beaten 3-0 by neighbours Excelsior Rotterdam in a nervy performance, which also left their fans in St. Maarten astounded.

Yet any apprehension their supporters might have had on the final day of the regular league season evaporated right from the start as Kuyt took advantage of a defensive slip to hammer home from a tight angle at close range with his right foot.

It was his 100th goal for the club and was followed within 11 minutes by a towering header as he connected with Eljero Elia’s cross to spark early celebrations in a packed Kuip Stadium, which were echoed in Madame Estate.

Kuyt might have secured his hat-trick just before halftime with a shot that went narrowly wide, but another chance to grab a third came seven minutes from the end when Feyenoord were awarded a penalty. Kuyt made no mistake as the partying continued before Peter van Ooijen pulled one back for the visitors two minutes from the end.

Feyenoord’s win moved them up to 82 points, one ahead of Ajax, who concluded their domestic campaign with a 3-1 away victory over Willem II. Feyenoord’s title win was welcomed at Café Rembrandt with loud cheers from its St. Maarten fans, who even lit some flares in celebration.