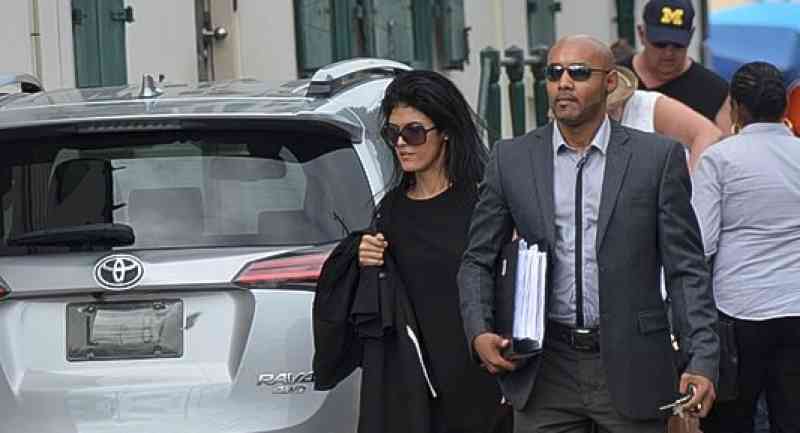 PHILIPSBURG–A prison sentence of fifteen months, a conditional fine of NAf. 250,000, on two years’ probation, was the Prosecutor’s demand Wednesday morning against A.E.A. for tax fraud.

A.E.A. was one of four defendants summoned to appear before a Judge as suspects in the so-called Emerald investigation. The cases against three other suspects, including the case against United St. Maarten Party Member of Parliament (MP) Chanel Brownbill, were suspended until the end of March. Parties agreed that Brownbill’s case will be heard March 29.

The Prosecutor’s Office is accusing Brownbill of having failed to file income and turnover tax for the amount of US $1,262,078 in invoices paid by the Harbour Group of Companies to Country Construction company’s bank account. These payments were made between 2009 and 2016, the Prosecutor said.

The case against Brownbill was postponed give attorney Safira Ibrahim time to add documents from her client’s accountant to the case file.
The main suspects in the Emerald-investigation are Director of the Harbour Group of Companies Mark Mingo and Checkmate Security Director O.A. The investigations into these two suspects are still ongoing. They will be summoned to appear in Court later.
Three other suspects in the same investigation were summoned to appear in court on Wednesday. One of them was police officer A.E.A, the brother of Checkmate Security’s Director.

The Prosecutor’s Office called on the Court to sentence A.E.A. to a prison term of 15 months and a conditional fine of NAf. 250,000, on two years’ probation. The defendant, who did not appear in Court and was not represented by a lawyer, will learn his fate on February 22.

The Prosecutor found it proven that the defendant had failed to properly file for turnover and income tax for harbour payments to his company Emile Construction of more than $1 million.
He said the defendant had incorrectly put his turnover tax returns over the years 2013 up to and including 2016 at “zero” and had only reported his income as a police officer for his income-tax returns of 2013, 2014 and 2015.

“Everybody knows you have to file turnover tax. If not, you’re punishable,” the Prosecutor said. He stated that the Tax Department had set the amount of unreported income at more than NAf. 850,000.
The cases against S.R.A.D. and K.G.L. were postponed until March 27 because their lawyer reportedly had acute health issues related to the landfill fire.