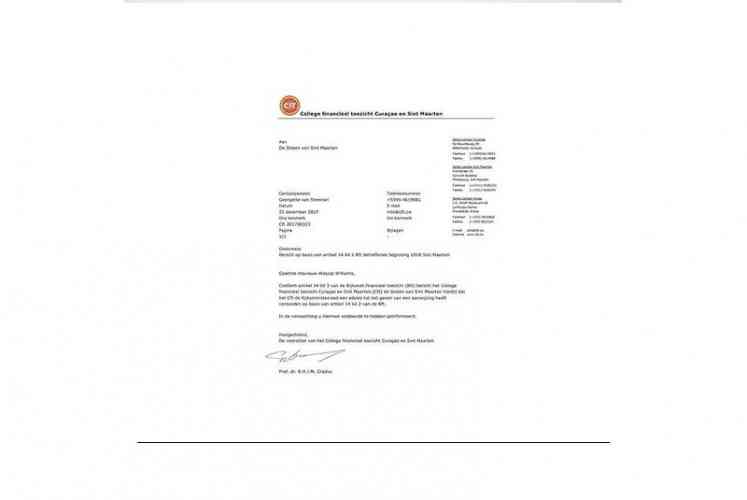 THE HAGUE–The Committee for Financial Supervision CFT has advised the Kingdom Government to give the St. Maarten Government an instruction, based on the fact that the country has no adopted 2018 budget and that there is no prospect that this will be secured soon.

CFT Chairman Raymond Gradus informed President of the St. Maarten Parliament Sarah Wescot-Williams through a letter on Friday that the CFT had advised the Kingdom Council of Ministers to issue an instruction to the St. Maarten Government based on article 14 sub 2 of the Kingdom Financial Supervision Law.
Article 14 specifically deals with the absence of an adopted budget. According to the Kingdom Financial Supervision Law, the CFT notifies the Kingdom Council of Ministers when it has not yet received an adopted budget by December 15 and, in its opinion, there is no prospect of a draft budget or adopted budget being submitted within any reasonable period of time.
The law states that the CFT may include a well-founded recommendation in its advice to the Kingdom Government to issue an instruction. The law also states that the Parliament of the country in question is informed of the CFT advice.
St. Maarten has a draft 2018 budget, which was sent to the CFT late July 2017. The CFT sent its advice on the draft 2018 budget to Finance Minister Richard Gibson on August 9. The CFT found that the draft budget largely complied with the norms of the financial supervision law, but advised to further substantiate a number of expected revenues and expenditures.
By the time Hurricane Irma caused widespread destruction on St. Maarten one month later, the St. Maarten Parliament had not yet handled the draft 2018 budget. In the meantime Government’s financial situation has changed drastically and a sizable budget deficit for 2017 and 2018 has been projected.
The Kingdom Financial Supervision Law states that if at the start of a budgetary year no budget relating to that year has been adopted, the budget of the prior year, in this case that of 2017, will serve as the basis for Government.
The last time St. Maarten received an instruction based on the financial supervision law was in September 2015. At that time, St. Maarten was instructed to eliminate its payments arrears, to compensate its deficits incurred over 2010-2014, to include all expenditures relating to pension and healthcare provisions and to reform the pension and healthcare system before the end of 2016.
Before the hurricane St. Maarten was well on its way to complying with the parts of the instruction relating to the payment arrears to the Social and Health Insurance SZV and the General Pension Fund APS and the compensation of the budget deficits of earlier years. The reform of the pension and healthcare system to make it more affordable were projected to start in 2018.