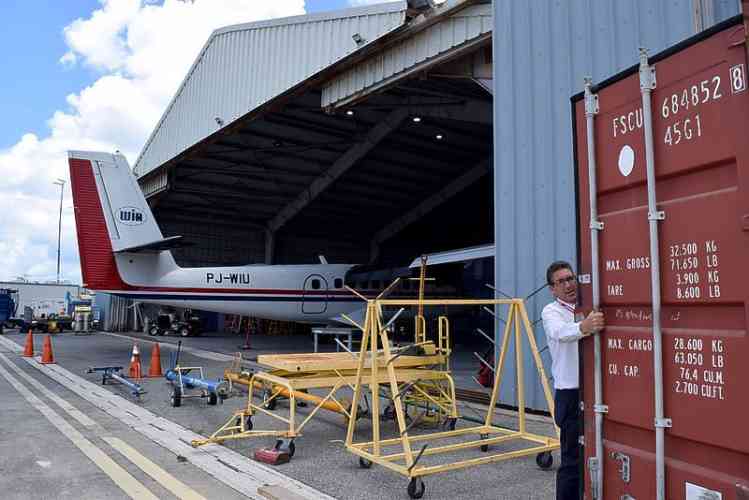 AIRPORT–Windward Islands Airways International Winair had the unfortunate reputation of an airline always on the brink of folding up. The image of the destroyed buildings and missing airplanes after Hurricane Irma tore through on September 6, 2017, added to the false belief that this little St. Maarten airline’s days in the sky were over.

This was the furthest from the truth. Winair, under Chief Executive Officer Michael Cleaver, has become a financially viable airline with expanded routes. It was a company with a healthy balance sheet and viable operations when Irma struck. However, this was not so widely known and the picture told a sad story.

“Business has come back quicker than we thought,” said Cleaver. Winair is meeting increasing demand with its fleet of three airplanes, down from five pre-Irma. Two planes were sent back to the Canada-based leaser three months after Irma struck.
The fleet will grow to a fourth airplane come November 12. This Twin Otter will aid the airline’s growing load factor for the 2018-2019 high tourist season.

Winair is looking to acquire its own aircraft, rather than continuing to lease its fleet, to service the medium- and long-haul routes. The goal is to buy an aircraft by the second quarter of next year. Owning an aircraft “is a little more expensive than leasing, but we will be the masters of our own destiny,” said Cleaver.
“We are getting people here. Our recovery is also tied to that of hotels and in particular Princess Juliana International Airport. They reopen, we will see more demand,” Cleaver told The Daily Herald.

Winair’s physical operations are in full swing. Its main hanger is rebuilt and functioning. Without this building, the airline would have been grounded post-Irma. Getting that building cleaned up and ready to accept planes for constant maintenance came from Winair’s ability to hire contractors and pay them out of pocket.
The airline has not received a single guilder from its two shareholders – the governments of St. Maarten and the Netherlands. However, Winair did not actively seek any financing from its shareholders, as it had the financial strength to do it on its own at this juncture.

Neither did money come from insurance, at least not immediately. It was money in the bank that pulled Winair out of its Irma debris.

“Due to our financial diligence, we could hire a contractor almost immediately after Irma. We are self-financed up today,” explained Cleaver.

The total rebuild will cost the company just under US $1 million. Some of that cost will ultimately be covered by insurance pay-out. Most of the airline’s claims have been “successfully negotiated,” with a few smaller claims still outstanding.
Winair too learned of the “under insurance” trap, said Cleaver, but was able to fend for itself.

Partnership
Winair’s growth also stems from its partnerships. “After the hurricane, we had to look at alternatives.” Guadeloupe-based partner Air Antilles pointed to the need to service routes such as Curaçao, Bonaire, the Dominican Republic and Haiti. The two airlines together now cover a large swath of the Caribbean.

“The results have been encouraging. Flights are performing as expected,” said Cleaver, who is proud that Winair is currently the only airline in the Dutch Kingdom servicing all six Dutch Caribbean islands.

“Air Antilles has been a true partner. Winair looks forward to continued growth and business development with our partner in Guadeloupe. We complement each other well as partners and not competitors,” said Cleaver.

All expansion of vision and reach have led to Winair “achieving a modest profit in the first half of 2018.” This is testament to the dedicated work and commitment of the entire Winair team, said Cleaver. He highly praised each employee for giving their all to keep the airline in the sky, and the management team members who worked shoulder-to-shoulder in the recovery.

A profit, even modest, can quickly disappear in future quarters if the product is not tended to. Winair is keepings its focus in its future with a conscious reminder of its past precarious financial state. To this end, route expansion is modest and cautious. “We have entered the long-haul market and we have to keep to our commitments.”
More flights connect destinations with demand – St. Kitts and Nevis, Antigua and Puerto Rico – to St. Maarten. The airline operates approximately 38 flight per day.
Revised schedules of airlines will also add a boost. Air France is a Winair partner and its return to five flights a week come October is another milestone for the local airline.
Winair is forecast to transport approximately 175,900 customers for 2018. The airline was poised to have another banner passenger movement milestone 2017, but along came the events of September 6. That year closed with a passenger number of 187,761. 2016 was “a record year” and Cleaver is confident so will be 2018 – the year of recovery.

Next year will be better than 2018; the airline anticipates another modest growth. Winair is also “optimistic about 2020.” This stems from planned reopening of several hotels and resorts as well as feeder businesses.
Winair is poised to add more connectivity via St. Maarten come 2020, via its own network and the in-development CaribSky Alliance.

Importance of ‘IT’
Winair’s ground operations – its buildings and other fixed structures – are slated for completion by the first quarter of 2019. The buildings, some of which were decades old, are now hurricane-reinforced. The information technology (IT) server room is “a bunker,” as described by Cleaver.

It is protection of data as well as the fleet that proved crucial to the airline’s relatively quick turnaround. Servers were loaded by IT managers CaribWorks onto airplanes and sent to safety in the Southern Caribbean. Those servers were the beating heart of Winair. The planes were the body. Without one, Winair would be brain-dead.

Recalling the state of Winair’s physical IT structure after Irma, Marco de Hooge of CaribWorks said: “Everything was gone … 100 per cent destroyed.” The company did foresee the massive impact Irma would have on physical operations and took steps to safeguard the heart. “We saw this coming. … We knew Irma was bad news.”
The servers moved twice prior to coming back home – first to St. Vincent with the fleet to wait out Irma, and Bonaire to escape Hurricane Maria. CaribWorks cobbled together a few still-functioning computers and attached the servers when back home. This was the start of Winair retaking to the skies.

One hard lesson learnt from Irma is that the IT system must be protected. “All of us in the airlines business overlooked the importance of IT in the restart of operations. Without those servers, we could not restart our operations at the level we did,” said Cleaver.

A manual process was possible, but would have been time-prohibitive. Operational servers and a staff with a dogged commitment to see planes in the sky saw Winair execute 70 relief flights post-Irma, possibly the most of all airlines.
Communicating with the airline network overseas and with passengers was also key. CaribWorks had a still-working phone and used that to piece together yet another link for its client Winair. “Voice connection in this business is as critical as data,” said Cleaver. This was a “huge component,” considering Winair’s own voice connectivity was only restored some two months post-Irma.

Winair did see a good from Irma’s wrath. The airline opened a front office on W.J.A. Nisbeth Road to cater to passengers. This office is to stay operational after the offices at the airport reopen next year.

‘Back’ Up
Management and staff did not sit back when confronted with weather-bombed-out buildings. They took time to reflect, but not to despair. They put their shoulders, backs and minds into cleaning up and returning to the skies.

Together they cleaned some 38 five-tonne trucks of debris from the Winair premises in the eight weeks after Irma. This cleared the way for contractors to get started on rebuilding. “Pilots, ground crew, administration all pitched in,” Cleaver noted. Some, whose place at Winair was no longer available, were even hired afterwards by the contractor to work on the rebuild.

A total of 147 people were employed with Winair pre-Hurricane. That number has dropped to 97. Some 13 persons will be added for cater to increased operations. Those will include former employees as well as new hires. Cleaver explained that some employees have moved on to start businesses or to work for other companies.
Winair is home to 25 pilots and 94 per cent of its staff are Dutch citizens. Only six people are on work permit owing to the non-availability of those skills in the country.
“It’s the people who make Winair. They made the huge difference and accomplished a herculean task,” said Cleaver.

Winair Supervisory Board Chairman Georges Greaux could not agree more. He added that the airline’s survival is contingent on passengers’ continued support. “They stood by us and believed we could do it!”

Ferry not
“But Winair’s prices are always too high” is a usual lament about the airline. Often that lament is coupled with a ferry comparison. This is a practical example of comparing apples and pears, said Cleaver. An airline such as Winair has much more cost attached to its operation and this is reflected in the ticket prices.

Between 30 and 40 per cent of the Winair ticket is taxes and fees. “We are a full-service airline. Any lower cost would be suicide for us. Our cost is based on our reality,” said Cleaver. In spite of its size, Winair’s operations and requirements are the same as large-legacy carriers such as Royal Dutch Airline KLM.

Also, short and more frequent flights mean Winair has a high maintenance bill. “We have all the cost of a legacy carrier. … We are a victim of reality,” Cleaver explained. More take-offs and landings translate into more maintenance.
Fares to Saba and St. Eustatius are a little lower owing to the minority-shareholder position of the Dutch Kingdom.

Winair “is not more or less expensive than its competitors,” Cleaver was keen on pointing out. This airline is in line with industry pricing.
“You have to do the business you are good at,” he said. This philosophy moved “Winair from a follower to a leader in the region.”