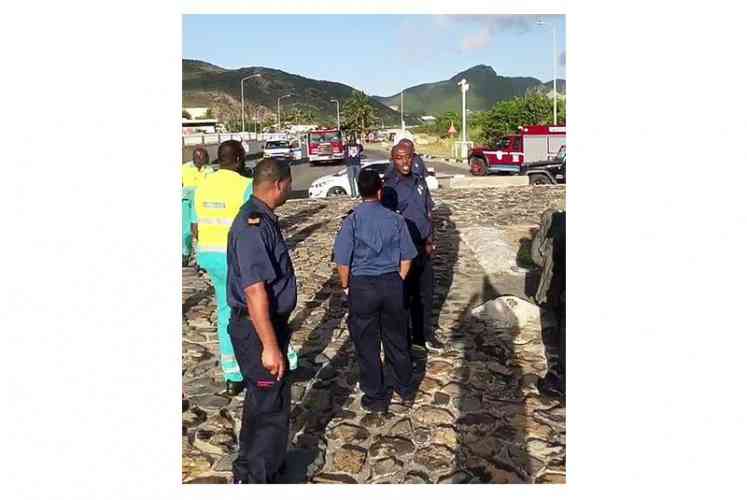 Fire and ambulance workers at the Salt Pickers Roundabout

PHILIPSBURG—Firefighters and ambulance personnel staged a protest early Friday morning at the Salt Pickers roundabout in Philipsburg. The roads were blocked to traffic and the emergency vehicles blared their sirens. The demonstrators later moved to the Government Administration Building.

Windward Islands Civil Servants’ Union/Private Sector Union (WICSU/PSU) Secretary General Riegnald Arrindell told The Daily Herald that the union and members held a brief discussion with the Prime Minister Silveria Jacobs about the temporary relocation of staff to execute repairs and address a mould issue at the fire station in Cay Hill.

“The prime minister explained some of the kinks which occurred in the line of communication. Seemingly information was passed on but it did not reach our office for some strange reason.

“The prime minister informed us on all the efforts and actions that are being taken to remedy the situation. However, based on what we picked up it doesn’t seem as though the target [relocation-Ed.] will be met to get our guys out preferably by today,” Arrindell said.

He added that they received a notice that the Labour Mediator wished to meet with the union and workers. They were also informed that office of the prime minster would be contacting them regarding updates.

“The prime minister made it clear that it [this situation-Ed.] has her attention. She’s concerned about the situation and she gave us her word, so we are taking it in good faith. At the end of the day we need to see a move as quickly as possible.”