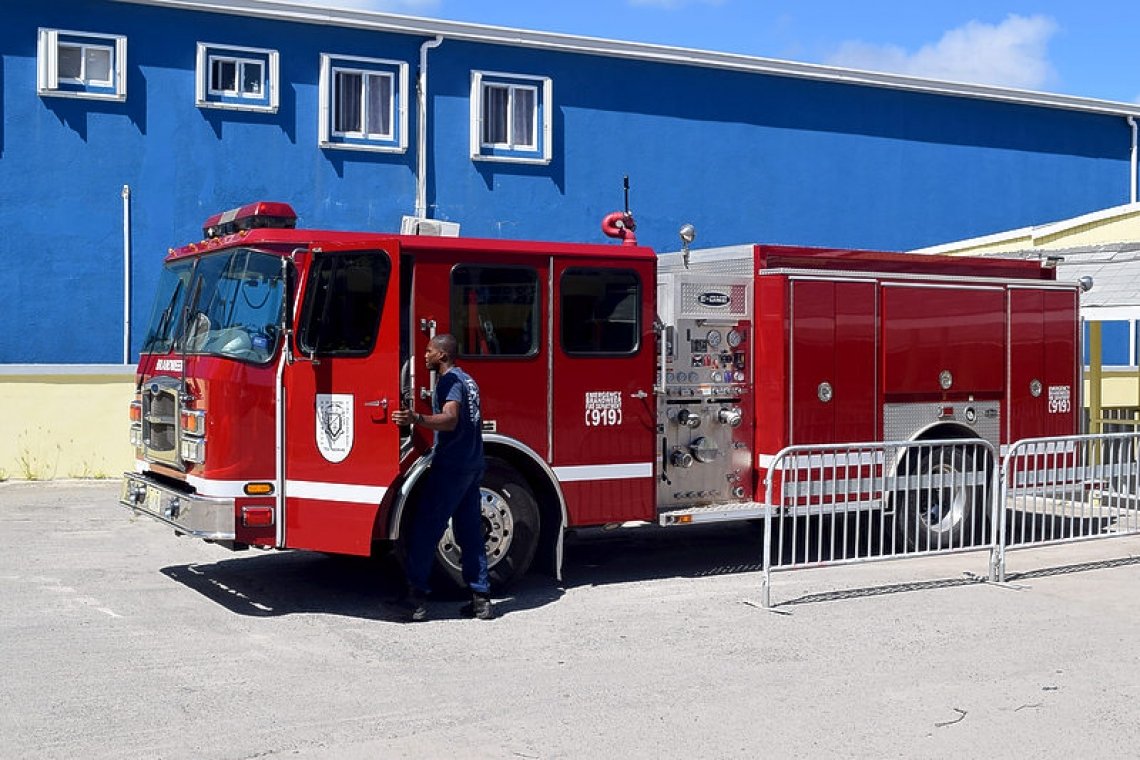 A fire engine at the temporary fire station at Bute Hotel.

PHILIPSBURG–The St. Maarten Fire Department is to start training two classes of would-be firefighters on March 16. More than twenty trainees will take part in the new digital training course, said Fire Department Section Head for Fire Suppression Nico van Zand on Tuesday. This move will seek to address the shortage of staff at the Fire Department.

This is the first-time the Fire Department will be using the new digital learning system, said Van Zand.

In total, 21 persons will start training to become firefighters. This will be in collaboration with other Dutch Caribbean islands, with six persons from Saba and St. Eustatius. Fifteen of the firefighting candidates are from St. Maarten.

The course instructors will be provided by St. Maarten, said Van Zand. The instructors are currently in training to deliver the course.

The new course will last approximately nine months and comprises three separate modules. Each module will have six different exams that the trainees must pass to become certified firefighters.

“The beauty of the whole system is that when they [trainees – Ed.] have their diplomas, they can work in the Netherlands afterward,” said Van Zand.

The first module will teach basic firefighting methods. It will encompass fighting structural (building) fires, as well as fires on aircraft and ships.

“Now, we are also teaching them how to put out fires on cruise ships and to assist the Fire Department at the airport. … We will teach them what to do in all the circumstances that we can have in St. Maarten. That is different, because in the past all we were teaching was structural firefighting and that was it,” said Van Zand.

According to Van Zand, the trainees will also learn new techniques in firefighting, such as defensive and offensive tactics. He said trainees will be instructed to identify the best tactics to fight fires and to use them appropriately.

“In the past, if there was a fire, two persons would go in or four persons would go in [a burning building] and fight a fire from inside. Due to the fact that a lot of accidents happened a couple of years ago in the Netherlands with some firefighters dying, there are new approaches on how to put out fires. … You have to think more than you did in the past,” said Van Zand.

The second module will teach HazMat techniques. HazMat is an abbreviation for “hazardous materials” – substances in quantities or forms that may pose a reasonable risk to health, property, or the environment. HazMat includes such substances as toxic chemicals, fuels, nuclear waste products, and biological, chemical, and radiological agents.

In this module, trainees will be educated on how to approach situations involving hazardous materials, as well as on how to use the special equipment that is used in these situations.

The last module focuses on search-and-rescue and disaster management. This will focus on traffic accidents and how to rescue people from collapsed or structurally compromised buildings in the event of hurricanes and earthquakes. Another component will focus on water rescue and emergency medical technician (EMT) training.

According to Van Zand, the new digital course adds three months to the former firefighter training course and is designed based on St. Maarten’s risks.

“We ask more of our people than we did in the past. … We are improving ourselves not only to take care of the basics, but also in specialisation. And that is something that we need,” he said.