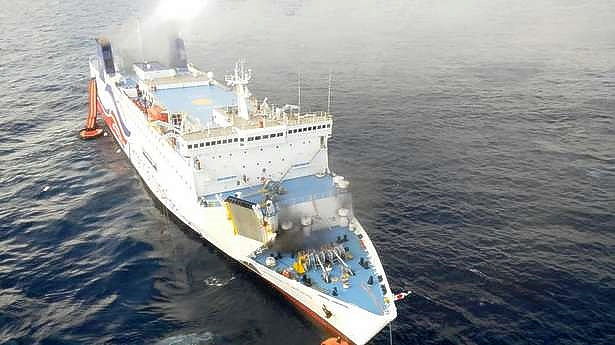 SAN JUAN, Puerto Rico–More than 500 passengers were being evacuated on Wednesday from a ship that caught fire about a mile off Puerto Rico’s north coast.

The fire was still burning aboard the Caribbean Fantasy, a combination cruise and ferry vessel, as the US Coast Guard prepared a mass-rescue craft to bring passengers safely to the San Juan harbour.

No injuries have been reported and no one is missing, Coast Guard spokesman Ricardo Castrodad said in a phone interview.

The fire erupted in the engine room and was spreading to the rest of the ship, Miami-based Coast Guard spokeswoman Marilyn Fajardo said by phone.

She said passengers were sliding down into rescue rafts, with 50 people still on board as of late Wednesday morning.

The ships run several times weekly between Puerto Rico and the Dominican Republic and this one was arriving in San Juan when the fire broke out, Castrodad said. It is unclear what caused the fire. (MSN News) ~ St. Lucia Times ~