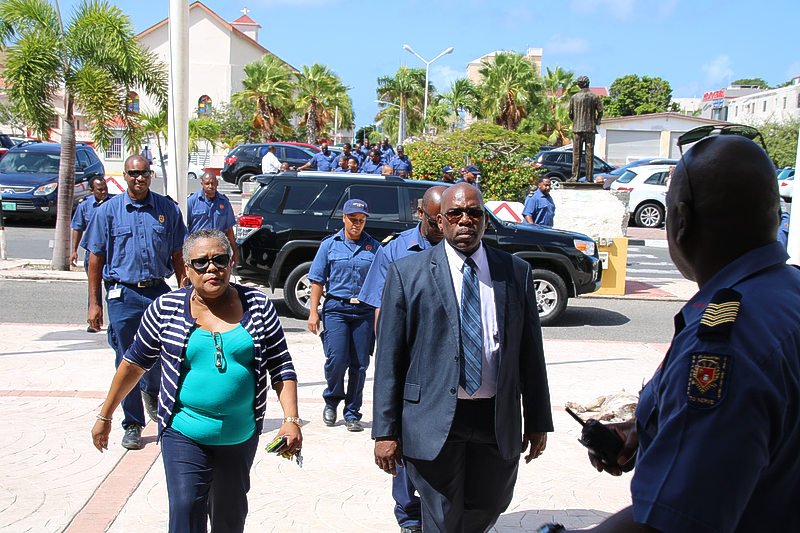 PHILIPSBURG—St. Maarten’s fire fighters are fed up with government and decided to stage a protest on Thursday morning. Close to 50 of them gathered at the Philipsburg office of their union the Windward Islands Civil Servants Union/Private Sector Union (WICSU/PSU).

The grievances have to do with the so-called Function Book dealing with promotions of the fire fighters. Several meetings were put off or moved, so the union and its members had enough and decided to stage the protest Thursday morning. President of WICSU/PSU Julia Solognier in an invited comment said that this action should not be considered a strike but a way to get the attention of the prime minister who is in charge of the fire department.

“We have spoken to the secretary general for months and every time the meetings got moved. It is time for a solution,” Solognier said. The group moved from the union office and marched to Parliament to show their disapproval of how they are being treated. Members of Parliament (MPs) welcomed the group that filled the public tribune prior to a Central Committee meeting.

MP Rudolph Samuel offered to bring the issue to the door of the Prime Minister William Marlin and accompanied the group to the Government Administration Building, where shop stewards, Solognier and Samuel went to speak to the prime minister while the disgruntled fire fighters waited outside the building.

The meeting took approximately two hours, but before making a public statement about the outcome the WICSU/PSU president wanted to meet with all the fire fighters.