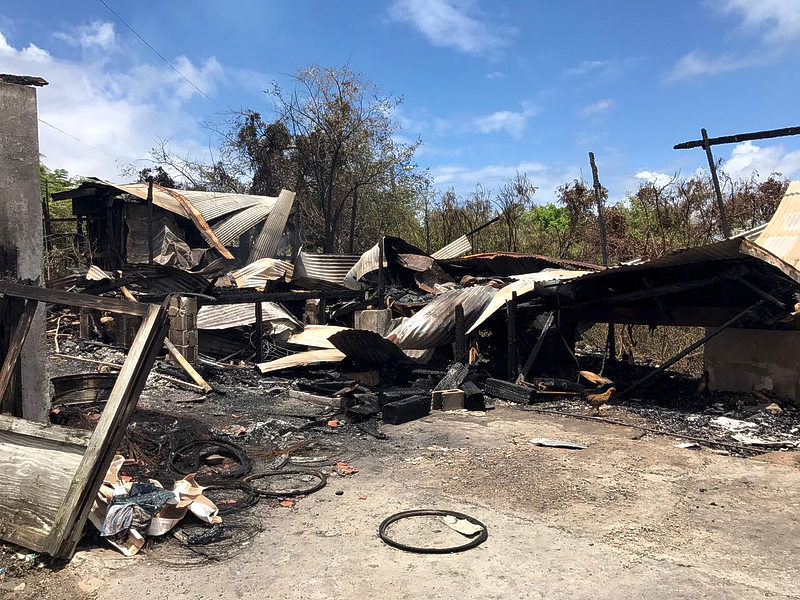 CAY BAY–Two homes in Cay Bay were gutted by an unexpected fire on Saturday night, leaving three families without homes.

Several police patrols and the Fire Department were sent to Elder Drive 7-B at approximately 8:45pm. Police spokesman Chief Inspector Ricardo Henson said on Sunday, “It was clear to see that the fire was quite large and it had spread throughout the entire structure. This building was divided into three parts and was occupied by a couple and two other persons.

“The Fire Department brought the blaze under control shortly after. Nevertheless, the building was totally destroyed by the fire. The fire also caused minor structural damage to the building next door and two vehicles that were parked nearby.”

The Rotary Club of St. Maarten pledged to assist the victims of the fire. Information and assessment of the specific needs continues this morning, with the Club preparing to assist in an immediate way.

Persons interested in assisting the victims can call Adelena Schaap at tel. 1-721-580-8237. Donations will be accepted at Toppers Restaurant on Welfare Road in Cole Bay, Island 92 Radio in the Federal Express Building on Welfare Road and at any Domino’s location. Domino’s St. Maarten has already pledged pizzas to the victims and rescue personnel.

The Rotary Club will be working closely with Community Police Officer Daryl Chandler to best understand the victims’ specific needs.

Police say luckily there were no injuries and the cause of the fire remains unknown.