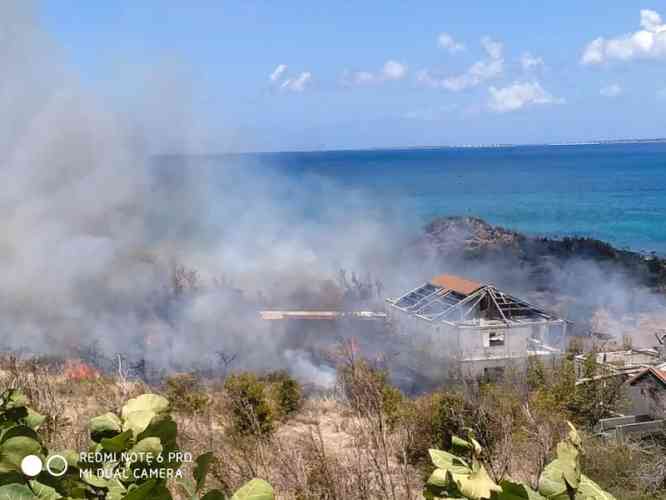 MARIGOT—Residents of at least ten houses in the Mont Choisy area of Friars Bay located on a hilltop above Happy Bay were evacuated as a precaution when an extensive brush fire broke out on Wednesday. The cause of the fire is under investigation by the Gendarmerie.

The French-side Fire Department received the first call at 11:33am that a fire had broken out in Happy Bay, near the beach where some containers were located. The area was recently used for the SXM Music Festival. About three to four acres of bush were engulfed in flames.

The pompiers responded with four fire trucks and nine firemen while the Dutch-side Fire Department assisted with one fire truck, a water truck and eight firemen. It took all afternoon and early evening to extinguish the fire with the last fire truck leaving the area at 8:00pm. Residents were allowed back into their houses at 7:00pm. Territorial Police and Gendarmes blocked road access to prevent any persons returning to their homes before the fire was completely put out. There were no injuries to firemen or to residents.

“We had to attack the fire from four different points to make sure we had it completely surrounded, to prevent it spreading further,” Fire Chief Lt. Bernard Maes explained on Thursday.

The respective Fire Departments of the island remain on high alert during this period of extremely dry weather.

“The public must be very vigilant not to light any fires, or accidentally start one, as in these windy conditions fire can spread and get out of control very quickly,” said Lt. Maes who added the pompiers are being called out almost every day to put out a fire.