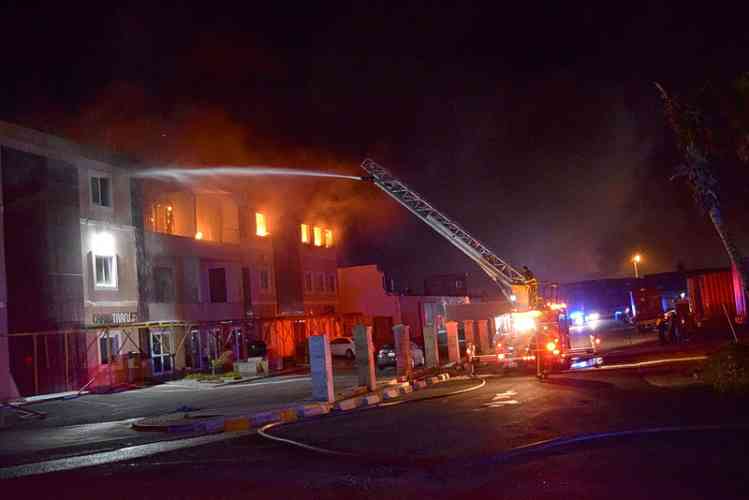 POINTE BLANCHE–Orange flames licked through the windows of the Intermar building in Pointe Blanche just before midnight Thursday partially gutting the building which houses several businesses. The cause of the fire is unknown and firefighters were on the scene into the wee hours of Friday morning trying to extinguish the flames.

Insufficient water pressure is said to have impeded the immediate start of attempts to put out the fire. Eventually, the ladder truck was put into use. Three fire trucks were on scene while police controlled traffic in and out of Pointe Blanche.
The building houses several shipping-related offices, including Tropical Shipping and CaribTrans, as well as warehouses and Sulvaran & Peterson Law offices. It was partially under construction to repair damage caused by Hurricanes Irma and Maria in September 2017.
Fire Chief Clive Richardson, police spokesman Chief Inspector Ricardo Henson and Minister of Justice Cornelius de Weever were at the blaze Thursday evening.
Fireman-in-charge Silvanico Pauletta told The Daily Herald the call had come in at 11:35pm. Three fire trucks and one water truck were sent to the scene. He said no injuries were reported and firefighters had managed to get the flames under control.
This fire may have made a number of people jobless in an already struggling economy hard hit by Hurricane Irma just eight months ago.