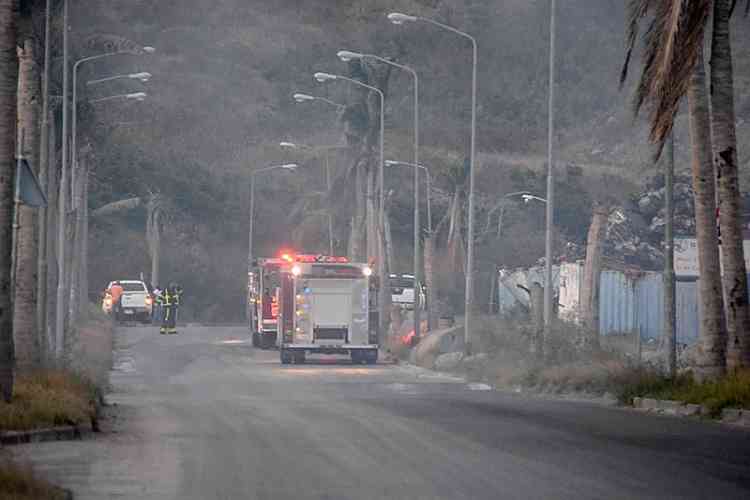 PHILIPSBURG–Due to the fire at the Irma dumpsite located near the Pond Island landfill, Prime Minister Leona-Romeo Marlin in collaboration with the Council of Ministers has taken several decisions including closing the government building and Philipsburg schools, after an assessment of the current on-going situation.

The Fire Department said they are trying to get the situation under control however it is difficult to control at the moment. Persons living around the area have been evacuated and they were advised not to go back until the situation is under control. Firefighters have been having issues to out the blaze due to lack of water and equipment. VROMI and the car-wreck company are busy assisting the Fire Department by placing sand on the fire to prevent it from spreading.

Police spokesman Chief Inspector Ricardo Henson informed The Daily Herald that roads leading up to the Irma dump will remain closed until the area has been declared safe. The police have been evacuating persons living around the dump site non-stop. “We had to send officers to knock on doors on Monday morning and we did find a man in a wheelchair that could not leave.”

“We escorted the man out along with children who lived in another home. Please stay out of the area until the Fire Department has the situation under control,” said Henson. Approximately 80 persons sheltering in Festival Village and Little League stadium were evacuated on Monday morning.

Residents and business owners are asked to use discretion and allow employees with respiratory challenges to take the necessary measures to avoid the wind-driven smoke. All persons are encouraged to purchase nose and mouth masks from local hardware stores as a preventative measure against smoke inhalation.