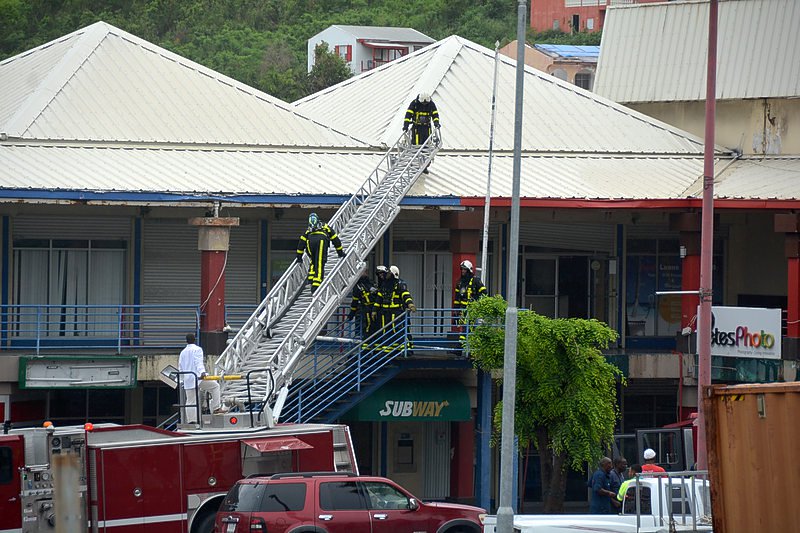 PHILIPSBURG–Clouds of smoke came out of the Le Grand Marché shopping complex on Sunday morning. Staff and shoppers thought the mega-supermarket was on fire, but after noticing the smoke coming from the Windward Islands Bank branch office located near the supermarket, it was evident that the roof of bank was on fire.

Firefighters were contacted at 11:50am and responded to the location with three fire trucks. Firefighter in charge Antonio Gibs told The Daily Herald the Fire Department had rushed to the scene and evacuated Le Grand Marché as a precautionary measure.
After a search in the bank, it was clear that the air-conditioner room along with files had been destroyed by the fire before they managed to put out the blaze. The bank branch has not been in use since the passing of Hurricane Irma on September 6. Le Grand Marché management was asked to turn off their generator for the firemen to secure the area.
“We had one problem. We contacted the police to assist us with traffic direction, but it took a while for them to get there, so our men did direct traffic until the police arrived,” stated Gibs. He added that the firemen had gotten the blaze under control within an hour. Police arrived at 12:30pm and said in a separate press statement that the Fire Department had already extinguished the fire on their arrival.
According to the Fire Department, the cause of the fire was still unknown and had yet to be established. No one was injured.