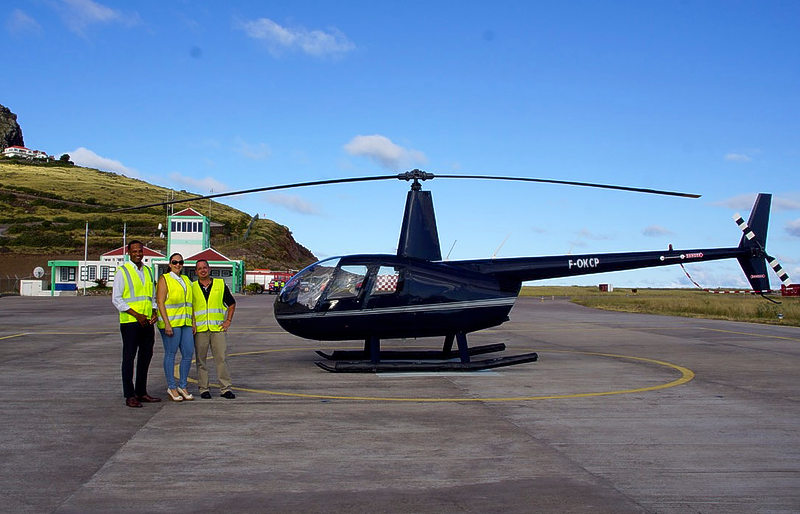 SABA–Corail Helicopteres Caribbean had the honour of being the first commercial helicopter to land in Saba last Friday since the green light had been given by the Dutch Government a little over a week ago.

Airport Manager Maegan Hassell, Acting Airport Chief Marcel Peterson and Island Secretary Tim Muller were at hand to welcome the first commercial helicopter flight. The helicopter had been hired by a yacht owner who wanted a photo taken of his yacht with Saba in the background.

The helicopter flew to Saba to pick up the photographer for a photo session. It was a lovely day and the results of the photo shoot were said to be beautiful. On board of the helicopter were Corail Helicopteres pilot Yannick Parrel and Pauline Spitz, a representative of the helicopter company.

Corail Helicopteres, stationed at Grand Case Airport in Saint Martin, carries out a lot of flights between Saint Martin and Saint Barths, but also carries out flights to Saint Kitts, Nevis, Anguilla and Antigua. Saba has now been added to the itinerary.

Commercial helicopter flights became a possibility when Saba Commissioner in charge of infrastructure and tourism Bruce Zagers was handed the formal permission of the Dutch Ministry of Infrastructure and Environment I&M during a meeting in The Hague last week Monday. Saba already had taken the necessary measures to make commercial helicopter flights possible, and was awaiting the formal go-ahead for this service to commence.

Commercial helicopter flights represent an important impulse for tourism to travel to and from Saba. In the past, several owners of mega-yachts had already queried about the possibility of landing on Saba, as had the French-side Corail Helicopteres.

Visitors will now also be able to enjoy Saba’s beautiful scenery through sight-seeing flights of some 15 minutes, offered by Corail Helicopteres. “Saba is already known for its magnificent diving and marine life, the superb nature hikes, and from now on our island can also be viewed from above,” said Commissioner Zagers, who has high expectations of this new development.

Initially existing on Reunion Island since 2004, Corail Helicopteres started Caribbean operations in 2014 from the Grand Case Airport with two helicopters. The company does charters, scenic flights and aerial work which is ideal for photo shoots.