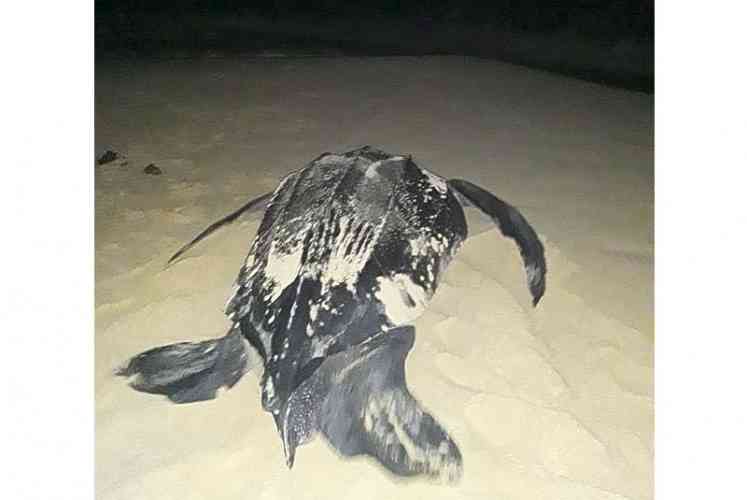 The foundation informs all stakeholders and beach users that the sea turtle nesting season has officially started and people should be vigilant when on beaches, as sea turtles can come ashore April through November each year. Besides, cars and quads should not be driven or parked on the beaches, as this will cause sea turtle eggs to die.

The Nature Foundation actively manages and monitors the sea turtle nesting activities on St. Maarten since 1997, and also protects their habitat, and nesting and foraging grounds in sea grass beds and on nesting beaches. Any suspicion of sea turtle nests can be reported to the foundation.

“While most of the people probably were enjoying Carnival, an observant local noticed the 1.50-meter leatherback turtle coming ashore and contacted the Nature Foundation. We were very pleased to see the first leatherback turtle successfully nesting on our beach and hope more will follow. Although we located hawksbill and green sea turtle nests and hatchlings last year, leatherbacks have not been nesting on our beaches since Hurricane Irma,” stated projects coordinator Melanie Meijer zu Schlochtern.

The Nature Foundation reminds the public to minimize beach lighting, keep beaches and waterways free of trash, stay alert when boating, avoid beach fires, be careful of where to place beach umbrellas and to not disturb nesting females. Nesting females can easily be disturbed and return to sea prematurely before laying eggs, therefore beach users should keep their distance and should not use lights when confronted with a sea turtle coming ashore.

Based on Articles 16 and 17 of the Nature Conservation Ordinance St. Maarten it is illegal to kill, wound, capture or pick up sea turtles. It is also illegal to directly or indirectly disturb their environment resulting in a physical threat or damage, or to commit other acts which result in disturbance of the animal. It is forbidden to disturb, damage or destroy sea turtle nests, lairs or breeding places. Also, it is forbidden to pick up or to destroy the eggs of any species of sea turtle.