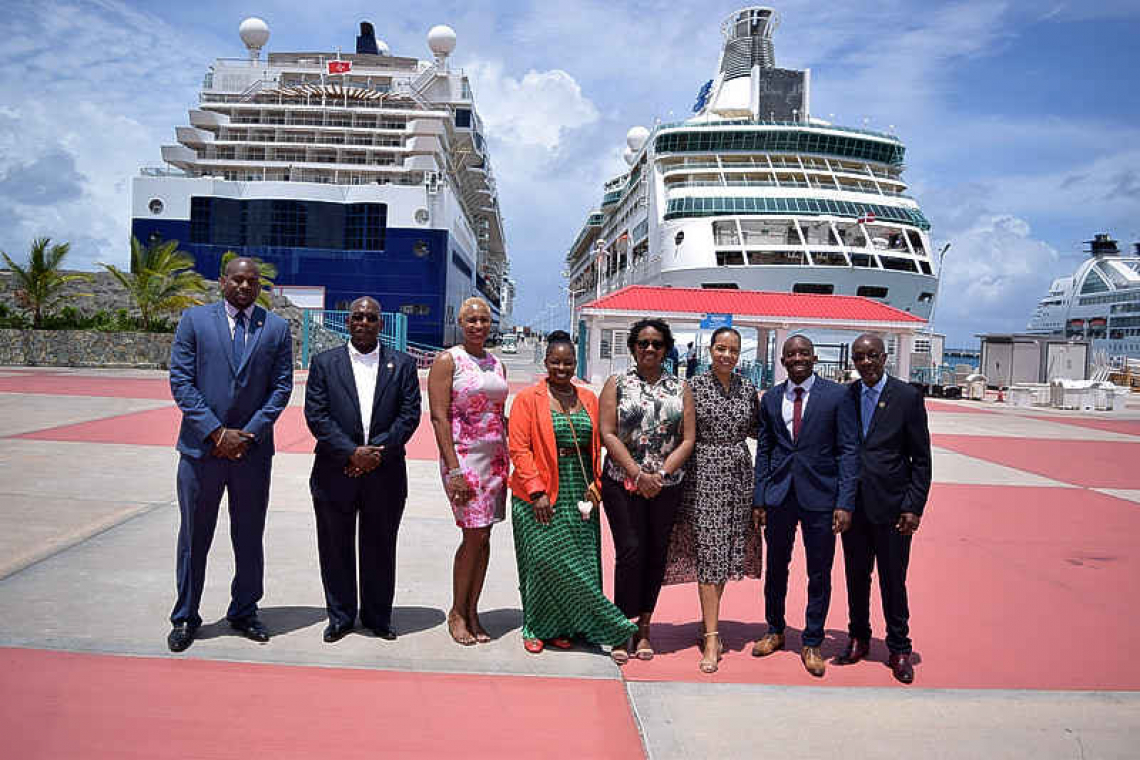 After roughly 450 days without commercial cruise calls, the country reopened its era of post-pandemic cruising with much fanfare in an official ceremony at the port that brought out ministers, Members of Parliament (MPs), senior civil servants, tourism stakeholders, cruise line executives and Port St. Maarten officials to celebrate the occasion.

His assessment was not an exaggeration. Saturday not only marked the beginning of St. Maarten’s 14-week stint of homeporting cruise ships Celebrity Millennium and Celebrity Summit – the largest ships to ever homeport at Port St. Maarten – but it was also the first major commercial cruise to operate in the Western hemisphere since the global halt of the industry in early 2020.

This latter fact was not lost on American media, with outfits such as CBS News and The New York Times sending representatives to interview St. Maarten ministers after Saturday’s ceremony.

The ceremony had an atmosphere of upbeat optimism that was reflected in some officials’ comments.

“It is probably the most exciting thing to happen since the pandemic started, [second only to – Ed.] being able to open the airport,” said De Weever after the ceremony. “The reason that it is such a celebration is the fact that this homeporting is something that the country has wanted for a long time. It is something that everyone understood the benefits that this would bring … and we get to be the first to restart on this large of a scale.”

“I’m thrilled,” said Carroll, referring to the resumption of cruising. “This is a gigantic opportunity and just the beginning of the rebirth of our industry after this long hiatus.”

“From a destination standpoint, it is phenomenal,” said Gumbs. “This was not done overnight. This took months and months of planning and preparation and meetings and late nights and early mornings and weekends and holidays, but I am happy to say that, as a port, as local representatives, as a company that represents more than a quarter of the [gross domestic product] GDP, that we are happy here today to see vessels return.”

Initially, St. Maarten was slated to homeport the 2,138-passenger Celebrity Millennium for the entire 14-week season.

The vessel was to offer seven-day cruises on a so-called “butterfly itinerary”, a set of two alternating routes. The first route is to call at Barbados, Curaçao and Aruba, while the second route was to feature stops at St. Lucia, Tortola, and Barbados.

With major cruise lines now planning to begin cruises to Alaska in July, Celebrity Cruises – a subsidiary of Royal Caribbean Group – will pull the Celebrity Millennium from homeporting in St. Maarten after three weeks, to replace it with the similarly-sized Celebrity Summit for the remaining 11 weeks of the homeporting arrangement.

Celebrity Summit can accommodate some 20 passengers more than Celebrity Millennium.

“There was a very specific list of ships that were able to operate out of Alaska and Celebrity Millennium was one of those ships,” Carroll told The Daily Herald on Saturday. “As we have been re-planning, we have had to shuffle and play a little bit of musical chairs with some of our ships. We wanted the Celebrity Summit to go to Alaska. Unfortunately, it wasn’t one of the ships on those lists.”

Carroll also confirmed on Saturday that the St. Lucia stop in the itinerary will be replaced with St. Kitts.

According to Gumbs, before Celebrity Cruises committed to the homeporting arrangement, the cruise line required the port to invest in its homeporting facility. This led to Port St. Maarten transforming its temporary structure into a “hybrid” one with stronger, reinforced walls.

“It would have taken us a bit more than a month [to rebuild the facility after a hurricane]. So, we also made significant investments to basically convince Celebrity that, should there be a storm, we would be ready in a week,” said Gumbs. “We have worked on protocols and guidelines [to be used] in the facility as well.”

Besides Port St. Maarten, other key stakeholders have also been preparing for the start of homeporting.

Princess Juliana International Airport (PJIA) moved the immigration booths in its arrival hall to facilitate the movement of passengers during peak times on Saturdays.

Additionally, the St. Maarten Police Force KPSM said in a press release on Sunday that it will be implementing an action plan to crack down on traffic violations and crime in the Philipsburg area.

KPSM said it will be more aggressively issuing fines and towing vehicles parked illegally on Front Street, as well as increasing bike patrols and directing traffic near the port.

“This is to better protect residents and to safeguard the country’s economy in light of homeporting,” it was stated in the release.

“You need a place that has the ability to have international flights, the ability to fuel your ships, and the ability to provision them,” said Carroll about Royal Caribbean’s decision to homeport here. “St. Maarten has all of that infrastructure and those attributes, but most importantly, it is about the relationships that we have with the government and with the port. We just have this mutual understanding and trust.”

Other cruise lines have expressed interest in homeporting their vessels at Port St. Maarten, said Gumbs, adding that this is because of St. Maarten’s proximity to the United States (US) and the port’s facilities.

“Most of these vessels choose to homeport on a Saturday, which is also a very busy day at the airport. So, we are also looking at timing the growth of the business with the completion of the airport [reconstruction].

“Besides that, right now we only have one terminal, so, as you would see today, the ‘[Celebrity] Millennium’ alone is using the [entire] terminal. Once we grow that business, there will be a need for not a hybrid terminal but a fully permanent structure where we can offer opportunities and cater to more than 2,000 passengers,” Gumbs told this newspaper after the ceremony.

De Weever said last month that she was targeting other cruise lines to potentially start homeporting in St. Maarten.

On Saturday, when asked for an update on these negotiations, De Weever confirmed that no other major cruise lines have given any “firm commitments.”

“A lot of it is dependent … on our airlift, on the capacity that we can handle at the airport, the amount of hotel rooms that we have available, whether the island can accommodate taking on that many people,” she said.

However, she hinted at trying to convince cruise companies to shift the operations of their smaller, outdated ships to ports like St. Maarten, instead of having these vessels scrapped for bulk metal.

“A good thing is that a lot of these cruise lines have had the opportunity to build bigger and better boats. So, some of the older boats … are available and, as long as it is economically viable for the company, why not continuously ask them if they are willing to start homeporting here?” said De Weever.