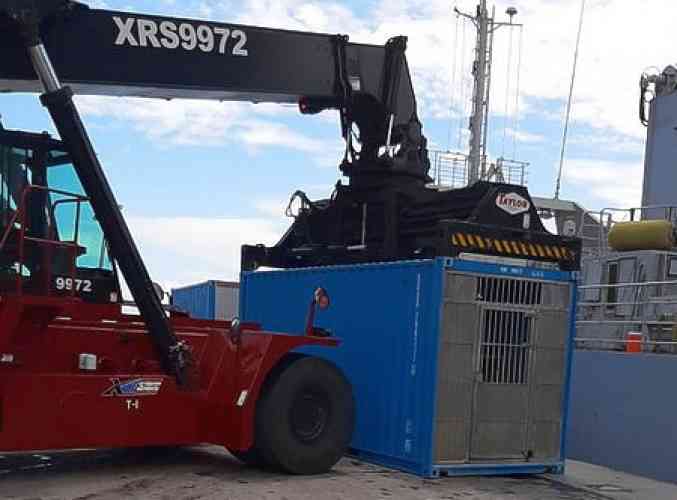 Container cell being offloaded at the port on Saturday.

The container cells formerly belonged to the Bonaire prison, a temporary solution while authorities were constructing the Judicial Institution Caribbean Netherlands (JICN), which opened in November 2018. Each container cell can house two inmates when fully operational.

The container cells are currently being stored at the harbour and are expected to be moved to their new home at the Pointe Blanche prison later this week. It will be a couple months before the container cells can welcome detainees, as electrical and plumbing fixtures, as well as concrete slabs, must be properly installed, said Tjandra Lake of the Justice Ministry’s cabinet.

Staff are also now being trained to accommodate the prison’s projected increased number of inmates, she said, noting that the addition of the cells is part of a project to increase the prison’s capacity and return St. Maarten prisoners currently being detained in the Netherlands “as soon as possible.”

According to Lake, the Justice Ministry is aiming to open this first batch of container cells in November, at which time the remaining cells should be on island and in the process of being fitted out.

When all 22 container cells are operational, the prison’s capacity will be raised from its current 86 to 130.

The oversees detention of St. Maarten’s inmates is an expensive proposition for government. After damage to the Pointe Blanche prison during Hurricanes Irma and Maria in September 2017, a few more than 60 inmates were transferred to Curaçao and the Netherlands in November of that year. At the time it was deemed a six-month temporary redistribution and was paid for by the Netherlands government.

Almost two years later, 22 inmates are still incarcerated in the Netherlands, according to Lake. For this service the St. Maarten government pays its Dutch counterparts an average monthly bill of NAf. 381,211.