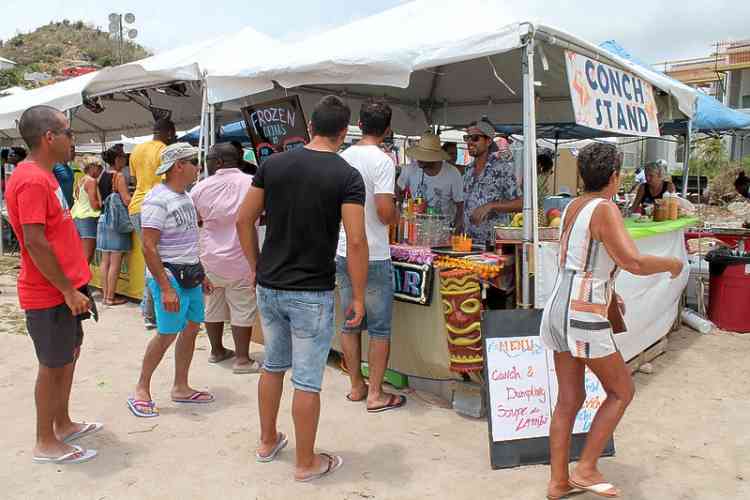 Visitors browse the many local food stands at Fish Day, one of the main attractions of the event. (Photo Robert Luckock)

MARIGOT–President Daniel Gibbs in his Fish Day speech on Sunday, highlighted the fishing and agriculture industries as playing more of a role in diversifying the economy and providing sustenance for a population more particular than ever about consuming fresh, natural, home-grown, quality food and seafood.

He noted the fish market project on the Marigot waterfront will permit 15 professional fishermen to resume their activities in prefabricated structures. This project was launched in March, and financed by the Collectivité to the tune of 180,000 euros and with the aid of European funds. In addition, a complementary dock exclusively for fishermen will be created in Marina Port La Royale.

He added the Collectivité’s financial situation since September 2017 is considerably reduced which is why projects “realistic and feasible” are being chosen.

He said the population can be very proud of the success of Fish Day, now in its 17th year, as a significant cultural reference point that celebrates the St. Martin people, local cuisine and traditional fishermen. He thanked all the partners that make it a success.

“Fishing has a played a significant role in the social and economic structure of our island,” he reminded, “For centuries fishing has served our community. It was always an essential sector of activity in the villages, from building the boats, going out to sea in all weathers, to selling the fish and feeding families. We can still buy fresh fish in the markets, a main ingredient in many local dishes. We can be very proud of our cuisine. That’s why I want to recognize our fishermen and pay homage to those who have passed.”

Also speaking at the opening of Fish Day on Sunday were Senator Guillaume Arnell, Députée Claire Guion-Firmin, and Secretary-General of the Préfecture Mickaël Dore. Those speeches were preceded by a minute’s silence to remember the late Father Charles whose funeral will be held today, Monday.

Attending from the Dutch side were Justice Minister Cornelius de Weever and Deputy Prime Minister and Minister of Education, Youth and Sports Wycliffe Smith. In addition, fishing association members from Association Maritime Fayolaise (AMF) from Martinique were also present.

Following the speeches, the elected officials went out in a boat to lay the traditional wreath in the waters of the bay in homage to fishermen who have passed on.

Gunslingers Steel Band got the live entertainment started at 11:00am on the main stage before the blowing of the conch shell and remarks from First Vice-President Valérie Damaseau. Other acts to follow on stage during the day and evening included Grain d’Or, Generation Status Band, Jolly Boys, Funtopia games for kids, SMS Experience, Tonic Band featuring Magic, Ebony Empress and Shan J, Rhythm and Groove, Youth Waves, Musicology featuring Odd Brother, Vers, Kembe and TTD. Ricky Da Phox was the emcee for the event.