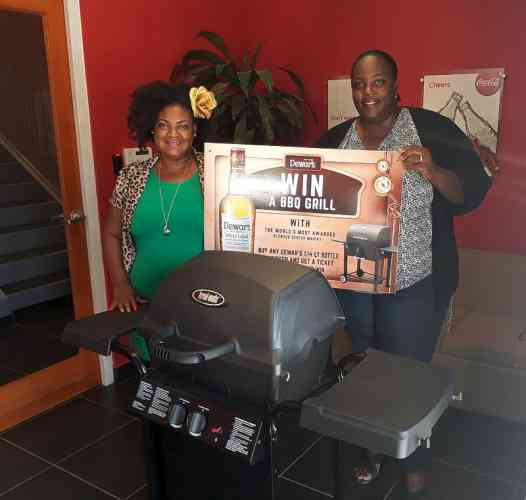 CAY HILL–Five persons were selected as winners of the “Dewar’s BBQ Grill Summer Campaign” held by CC1 St. Maarten in collaboration with some local retailers.

One winner was selected from each of five participating establishments: Cost U Less, Sunny Foods, Well Luck Supermarket, Fairway Markit, and Prime Distributors. The winner from Econo Supermarket will be drawn at a later date, as this supermarket started its campaign later than the other establishments. Some of the winners are Khalilah Aventurin (Prime Distributors); Linsey Weeks ( Fairway Mark It); Isha Brown (Cost U Less) and Linda Thompson (Well Luck Supermarket).

To participate in the raffle, shoppers had to purchase a bottle of Dewar’s White Label 1.14 litre, and they received an entry for the raffle. The campaign included in-store tastings for consumers to enjoy Dewar’s.

“It was certainly a very successful and interactive campaign and we were happy to be able to work alongside the various retailers while offering consumers a chance to win an exciting prize,” CC1 Trade Marketing Coordinator Kenty Lichtenberg said in a press statement.

https://www.facebook.com/CC1SXM/ for upcoming promotions, as the distributor is preparing for the holiday season.

“There is always a chance of winning something with CC1,” it was stated in the release.