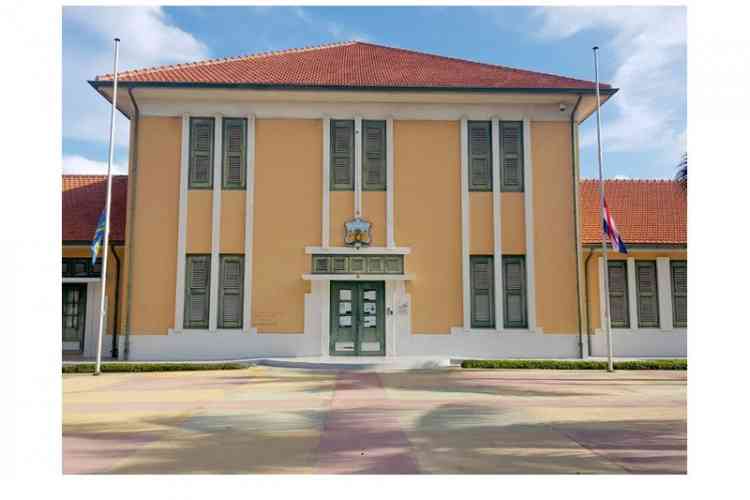 Flags flying at half-mast at the Courthouse in Aruba in memory of lawyer Derk Wiersum who was shot dead in Amsterdam on Wednesday.

PHILIPSBURG–Just like in the Netherlands, flags at the courthouses in Aruba, Curaçao and St. Maarten flew at half-mast on Thursday. The Joint Court thereby responded to the call of the Bar Association of the Netherlands to pay tribute to lawyer and Deputy Judge Derk Wiersum, who was shot dead in Amsterdam on Wednesday.

The brutal attack also made a deep impression within the branches of the Joint Court of Justice of Aruba, Curaçao, St. Maarten and of Bonaire, St. Eustatius and Saba.

“That lawyers, prosecutors and judges should be able to do their work in freedom and safety is of universal value. Violation thereof undermines the rule of law as we know it within the Kingdom of the Netherlands,” the Joint Court said in a statement on Thursday.

The Joint Court has expressed its condolences to Wiersum’s relatives. In addition, it also expressed its solidarity with the judicial organizations in the Netherlands.

“Certainly, in a situation like this, it is of great importance that we support each other in what is essential to our societies,” the Joint Court said.

The Court wished Wiersum’s family, relatives, friends and colleagues “much strength with this loss.”

As a precautionary measure in light of the approaching Tropical Storm Jerry, the Prosecutor’s Office in St. Maarten will close its office as of 12:00pm, today, Friday, September 20.