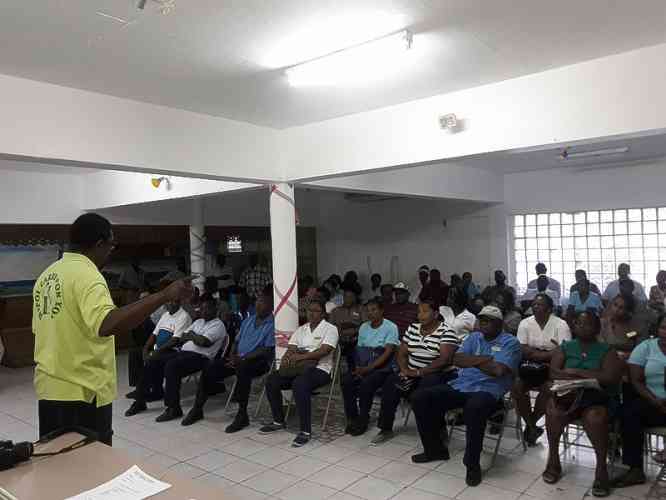 SIMPSON BAY–Two hundred five Diamond Resort Flamingo and Royal Palm Beach Resort workers are facing the breadline. The resorts plan to terminate the employment of their entire workforce as they prepare to close for reconstruction of the hurricane-ravaged facilities.

The resorts’ General Manager Mervin Le Blanc declined to comment on the matter when contacted last night. He said the resorts plan to issue an official statement with all the details on the matter.
The workers were informed of the closure and plans for reconstruction during a meeting with management last week Thursday. So far Flamingo and Royal Palm have been “model employers” and have been paying all of their staffers their full salaries, including benefits, and have even paid their workers their Christmas bonus despite being closed since Hurricane Irma in September.
Workers Institute for Organised Labour (WIFOL) President Theophilus Thompson said this is commendable and a move that more employers should emulate.
The workers met with Thompson late Monday about the announcement by the company that it would close. Workers said they had been told the intention is to close for two years and the plan is to rehire workers once the reconstruction has been completed.
Thompson told the workers during the meeting that the union’s hope is for as many workers as possible to be involved in the rebuilding process. His hope is for the maintenance, landscaping and security departments to be involved in the process. The union will attempt to negotiate this with the company. The workers were concerned about how effective this would be, given that an independent construction company will be overseeing the construction work and not the resorts.
Thompson urged the workers to not sign any individual termination agreements with the company and urged them to instead let the dismissal process follow its legal course via the Labour Department. He explained this process to employees.
Thompson said any company desirous of terminating the services of more than 25 per cent of its staffers has to file a request via the Labour Department. Dismissing all of the workers at Flamingo and Royal Palm will classify as a mass dismissal. In its request, the company has to give its reason for the dismissal request. Additional information can also be requested from the employer if deemed necessary.
The entire process should take about six weeks, but can take longer if information is not provided in a timely manner.
Thompson said many employers do not want to go through the dismissal process and instead prefer to approach individual employees to sign agreements. He said workers that do this risk not getting all their benefits, which should be in accordance with the collective labour agreement (CLA).
Thompson also explained what business interruption insurance is and said he hoped the Labour Department will request information on whether the resorts have this form of insurance.
The large group of workers who attended asked many questions during the meeting, which Thompson answered as best as he could.