Home The Daily Herald Flanders: “I am a victim of injustice by the police” 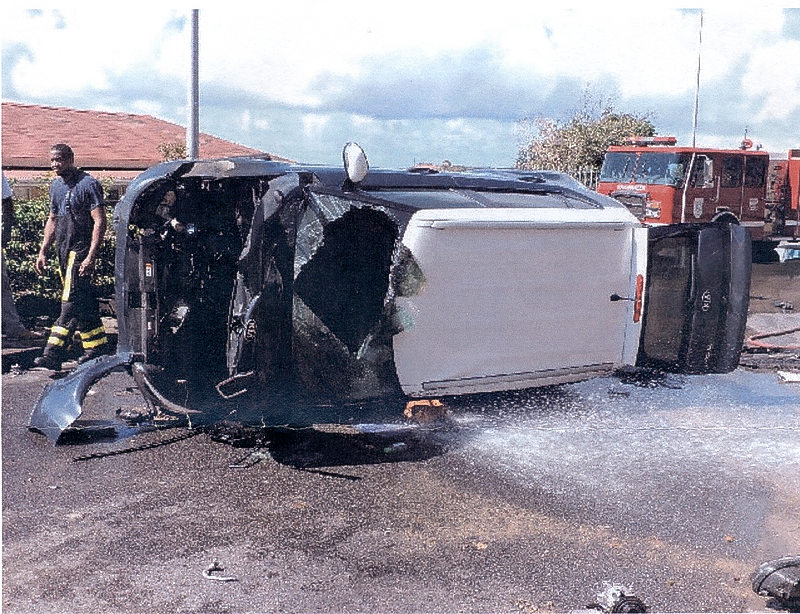 PHILIPSBURG–Lise Coats-Flanders was a victim of a car accident on Little Bay Road at 8:35am June 17. Her car flipped on its side and caught on fire, making it difficult for her to escape from the vehicle. The other vehicle involved in the accident had minor damage.

The police traffic patrol arrived on the scene and spoke only to the driver of the other vehicle, not to Flanders. She told The Daily Herald that officers on scene had taken only the story of the other driver and had found her at fault for the accident.

“I am dissatisfied and disturbed by the manner in which police officers on the scene conducted the investigation of the accident that morning. They both displayed unconcern about my wellbeing or an explanation of my version of what actually took place,” said Flanders.

Shortly after the accident Flanders went to the police station to speak to the head of the Traffic Department to explain her ordeal, but she was unsuccessful. She requested an investigation by the Police Internal Affairs Department and a few days later, she received word from the department via telephone that her complaint had been looked at and they had not found any reason to doubt the original findings from the Traffic Department officers.

The police informed the insurance company that she was at fault for the accident.

In a letter to Chief of Police Carl John and the Prosecutor’s Office on June 24, she stated, “The information provided in the police report, which falsely stated that I was speeding, has created a huge dispute between my insurance company NAGICO and Boogaard Insurances, as now Boogaard Insurances has counteracted the claim based on the false accusations and is now only willing to pay 50 per cent of the damages incurred for the accident of which I am not liable.

“Due to the improper and biased manner in which the entire investigation was conducted, along with false and inaccurate information provided to my insurance company about the details of the accident, I would like to schedule an appointment to meet with you.”

Flanders is upset that up until Thursday she had not received word from the Police Chief for a meeting about the incident. “The injustice needs to stop. The accident took place last month and I want to straighten this situation out as soon possible,” she said.

This newspaper contacted police spokesman Chief Inspector Ricardo Henson on Tuesday for a response to Flanders’ claims, but no comment was given up to press time.

Flanders considers herself the victim. She lost many items during the crash and the insurance company did not cover all her claims. She hopes to have this situation rectified as soon as possible.

Source: Daily Herald
Flanders: “I am a victim of injustice by the police”