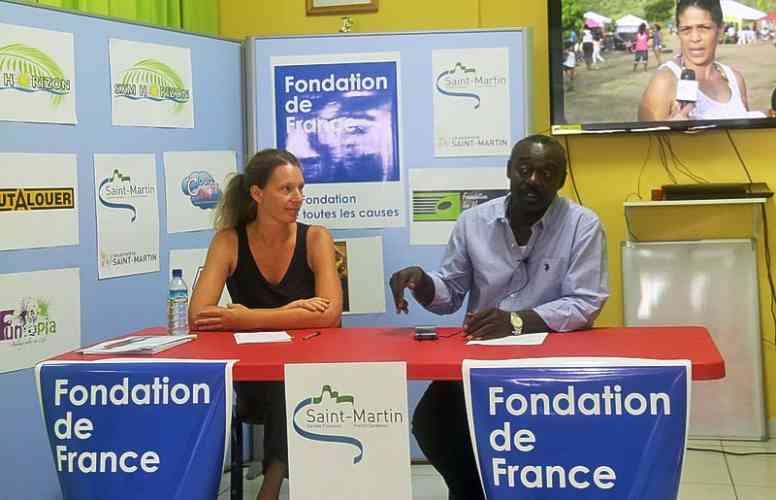 Fondation de France’s manager of Emergencies and International Solidarity Karine Meaux and Project Manager for the West Indies Célia Couvert met with partners and residents during their visit to measure the progress of supported projects and to ensure that the distributed donations have been used as efficiently as possible. They also engaged in dialogue with stakeholders in reconstruction projects, among which were public and private actors and associations.

Together with President of SXM-Horizon, Foundation for Hope and Music Development and former District Council Representative Paul Whit, Fondation de France’s representatives on Tuesday presented an overview of all projects and activities undertaken and realised in the aftermath of last year’s hurricanes.

Through private donations Fondation de France collected 14.7 million euros in aid of those affected by the hurricanes. To date, the foundation spent 10.5 million euros on 49 projects “to meet emergency needs but also to rebuild life” with a special focus on families and children, Meaux explained.

According to estimates, the French West Indies suffered damage of some 1.8 billion euros. In St. Martin and St. Barths 20,000 dwellings were destroyed or damaged. More than 55,000 tonnes of waste were collected, with more remaining in difficult-to-reach locations.
In addition to material damage, Irma and Maria also had severe economic and social consequences. Right after the disaster, shelter, food and water were provided to victims and they were assisted in their return to normal life. Aid also included psycho-social assistance, Meaux said.

The reconstruction of buildings took more time, as official regulations for rebuilding had to be observed and homes, but also roads, schools, businesses and public buildings, need to be built back stronger. “One year after Irma and Maria, all tarpaulins on the roofs have not yet disappeared,” Fondation de France stated.

Up to August 2018, the foundation spent 1.6 million euros in 16 disaster-relief projects throughout the Caribbean but primarily in St. Martin. This included the distribution of meals and the provision of shelter.

One of the projects highlighted by Fondation de France and SXM-Horizon was the Family Fun Splash mobile mini attraction park which was opened July 28-29 and August 25-29 and attracted almost 1,700 children of all nationalities during these two weekends.
The Family Fun Splash received 56,000 euros in Fondation de France funding “to see the people of St. Martin smile,” Meaux said. The event was sponsored by Collectivité de St. Martin, SXM-Horizon, Funtopia, Cloud 97 and 4 Real.

Whit said the Family Fun Splash might have been SXM-Horizon’s most successful event of the year, but it certainly was not its only initiative. On January 1, a lunch for the homeless was organised, and in April a walkathon for the elderly. In July and August there was a summer camp. On November 27, a Thanksgiving lunch for more than 200 seniors will be organised. The year will be closed off with Christmas-gift-giving to some 200 to 300 children, sponsored by a US college.