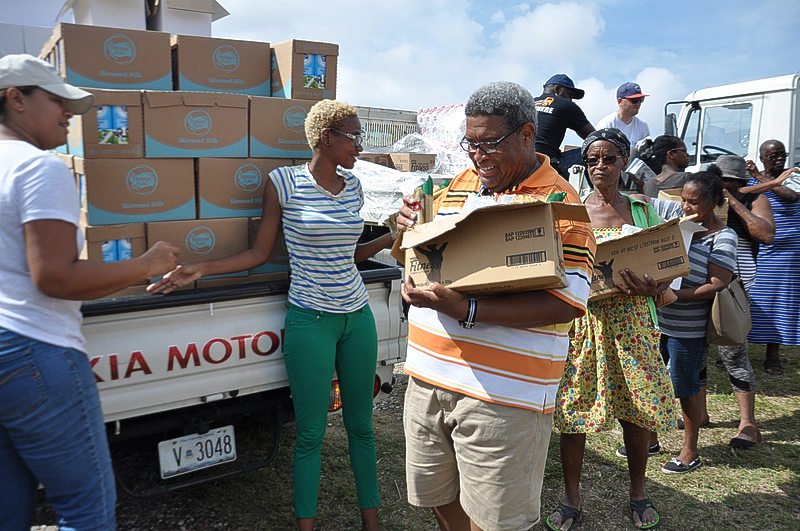 DUTCH QUARTER–Long queues of residents clutching bags and boxes flocked to a section of Dutch Quarter’s main road on Thursday afternoon to receive what some of them referred to as much needed food aid in the wake of Hurricane Irma.

Scores of residents formed a long line leading into a property off the main road where vehicles and volunteers were located in trucks and pickups to distribute the relief.
Each resident in line received, amongst other things, two bags of pasta, two cans of corn, canned sausages, two boxes of biscuits, a box of milk, a bottle of water and other items. Persons who had babies and infants were also provided with baby milk, baby cereal and fruit juices and if necessary also baby bottles.
Members of the Dutch and local disciplined services were on hand to control the crowd. The queue flowed smoothly and everyone received assistance within a short time. While most persons were grateful for the food aid received and left the area with smiles on their faces, some persons in the crowd could be heard complaining about the food items received with some saying it was not enough and others saying they were not happy with the things they received.
Culture Minister Silveria Jacobs had said earlier in the day in a message via Laser 101 that the relief efforts began on Wednesday. She did not have information on which areas the food aid were given out.
When asked why the food distribution took so long, she said, while this is not her area, she believed that authorities did not have a manifest of what items had been received as relief, amongst other things.
The food aid distribution is expected to continue in the coming days until residents in all areas receive the much needed food.