Home Local News Formation process said to be on track 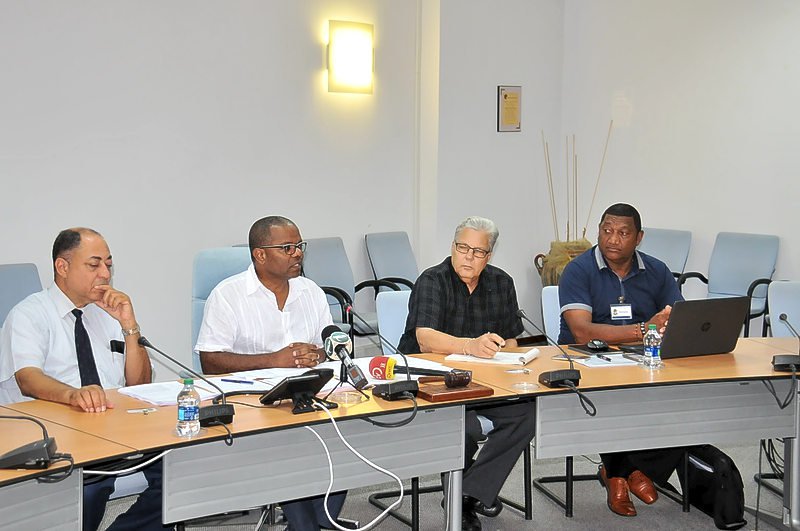 “Informateur” Etienne Ys (2nd from left) with his team.

WILLEMSTAD–The formation process of a new Government for Curaçao is progressing steadily, said “Informateur” Etienne Ys during a press conference. He will report his findings back to Governor Lucille George-Wout on Wednesday.

The three parties that committed to working together PAR, MAN and PIN already announced the names of their candidate-ministers. Ys expects the governing accord of the proposed coalition with 12 of the 21 seats in Parliament to be completed by the end of this week.   He considers it his duty to nevertheless talk to the three other parties with representation in Parliament, MFK, KdNT and MP. “Their input can have an influence on the policy programme while it is still being drafted.”

However, MFK has already declined the invitation to meet with the “informateur” because apparently a new government has already been formed.

Election winner PAR emitted a press release announcing that its leader Eugene Rhuggenaath is to become Prime Minister (General Affairs). He will also be in charge of the oil refinery.

The party’s president Zita Jesus-Leito has been nominated as Minister of Traffic, Transportation and Spatial Planning, Marilyn Alcala-Walle as Minister of Education, Science, Culture and Sports, and newcomer Quincy Girigorie as Minister of Justice.

PAR nominated Anthony Begina as Minister Plenipotentiary in The Hague too. He will represent Curaçao in the Kingdom Council of Ministers.

The party also announced that its President of Parliament will be William “Junior” Millerson, while Anamaria Pauletta will head its Parliamentary fraction.

Coalition partner MAN announced as the next Minister of Economic Affairs number two candidate Steven Martina. The proposed Minister of Social Development, Labour and Wellbeing is political leader Hensley Koeiman. Kenneth Gijsbertha will once again be appointed as Minister of Finance and Armin Konket as Minister of Administration, Planning and Service.

MAN intends to name Giselle McWilliam Vice President of Parliament, while Elsa Rozendal will be the party’s fraction leader.

The other coalition partner PIN will nominate its leader Suzanne Camelia-Römer as the new Minister of Health, Nature and Environment.