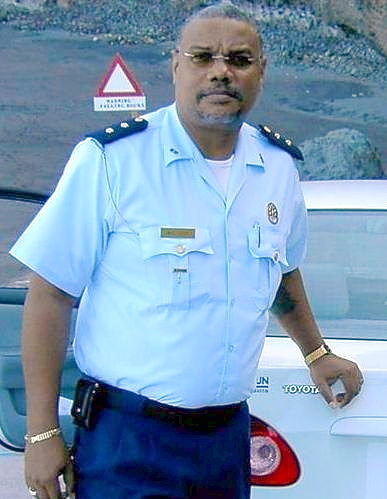 PHILIPSBURG–Former Acting Head of the Coast Guard Substation in St. Maarten Wendell Thodé, on Wednesday, lost his legal proceedings filed in April 2016 with the Court of Civil Service Affairs against the decision of the Commander of the Dutch Caribbean Coast Guard to repeal his request for his deployment.

Represented in these proceedings by attorney-at-law Jason Rogers, Thodé not only filed a case against the Coast Guard Commander, but also against the Governor and the Minister of Justice. His opponents were all represented by attorney Richard Gibson Jr.

Thodé was an officer with the Police Force of the Netherlands Antilles since August 1, 1978. On October 10, 2010, he was appointed Team Leader Heavy Crime Fighting.

In February 2013 the Coast Guard Commander filed a request with the Minister of Justice to appoint Thodé as Adjunct Head of the Coast Guard Substation in St. Maarten. By mid-2013 he actually started working at the Coast Guard pending the ratification by the Governor of the national decree for his appointment.

While preparing the decree in October 2014, it emerged there was no evidence Thodé had been submitted to a so-called “Class-A” security screening by the National Security Service of St. Maarten VDSM.

During a conversation with the Acting Coast Guard Director on December 9, 2015, Thodé was informed that his employment with the Coast Guard would be terminated in the event there would be no positive advice of VDSM by March 1, 2016.

The plaintiff had responded that it was not clear to him why he had to submit himself to a security screening, but said he was prepared to fill in the required forms and undergo screening.

During a performance interview Thodé was informed that he performed well due to his extensive experience and quality of work; however, he still did not heed calls to submit the required forms at VDSM.

By letter of February 5, 2016, Thodé informed the Acting Coast Guard Director that he did not refuse to, but that he did not have VDSM’s agenda at his disposal. He further questioned the legitimacy of the request as he had already been employed as Acting Substation Head for 18 months. He further claimed that during the application process for the job he was not informed about any screening, which according to him was also not required by law.

He claimed that three current and former substation heads had not been submitted to similar investigations, whereas he as heavy crime fighter had already been working in a position of trust, which he claimed would be sufficient proof of “integer and irreproachable” behaviour.

By letter of March 3, 2016, Thodé was informed that the Coast Guard Director had the intention to repeal his request with the Justice Minister and to terminate his employment with the Coast Guard as per April 1, 2016. This was due to an “irreparable breach of confidence,” because he had failed to fill in the security screening documents despite his promises to do so.

More letters followed in which Thodé claimed that VDSM was not authorised to perform security screenings for the Coast Guard without prior consent by the Minister of General Affairs, after which the request was to be forwarded to VDSM for an invitation to the person involved and for the handing out of required documents.

According to Thodé, the Coast Guard had not followed proper procedures. He stressed that he had not declined to cooperate, but could not do so without the Minister of General Affair’s approval.

During a Coast Guard hearing, Thodé’s legal counsel said there apparently was confusion within several government entities such as the Coast Guard, the Ministry of Justice and Country St. Maarten at large, concerning the proper procedures for screening.

In the contested decision of April 5, 2016, the Coast Guard Commander requested the Minister of Justice to repeal Thodé’s appointment. The Substation Head was ordered to dismiss him of active duties as per April 5, and to collect his personal equipment and access pass.

The Court of Civil Service Affairs stated that according to the National Ordinance on the Security Service it is prohibited to appoint a person in a position of trust without the Minister’s prior consent.

The consent must be based on VDSM security screening and a statement that with an eye on the continuation of the democratic state, the integrity of public service, safety, or any other important interests of Country St. Maarten, there are no objections to the person’s appointment. Security screenings can only be carried out after permission in writing by the person involved.

According to the defendants, Thodé had provided differing and “unjustified” statements about his security screening. His failure to fill in the required forms had led to a breach in confidence, they stated.

Thodé said he considered security screening “unnecessary burdensome and drastic” for him and his family.

The Court stated it was sufficiently clear that Thodé could only be appointed as Acting Substation Head after a preceding security investigation. The law provides that such an investigation is to be carried out by VDSM upon the Coast Guard’s request and with permission by the Minister of General Affairs and claimant.

The Court agreed that it would have been better if Thodé was investigated prior to his appointment, but this did not mean that he was entitled to decline any cooperation. The Court also said there was no proof that Thodé had ever been submitted to any security screening in any of his previous jobs.

In weighing all aspects in this case the Court arrived at the conclusion that Thodé’s objections failed; however, he is entitled to file for an appeal against the Court’s decision.