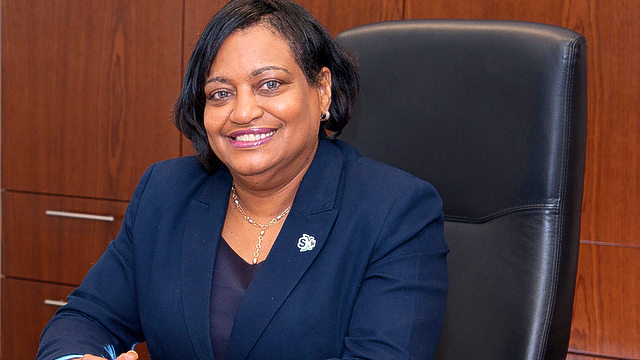 PHILIPSBURG–Former Princess Juliana International Airport SXM director Regina Labega is back in Government service as a policy advisor to the Economic Affairs department. She was appointed by former Minister of Tourism, Economic Affairs, Transport and Telecommunications (TEATT) Ingrid Arrindell before Arrindell left office, according to documents obtained by The Daily Herald.

Former Tourist Bureau head Regina Labega (57), writer Fabian Badejo (55) and E.A.I.F (36) were arrested on May 30, 2016, based on “complaints” filed by the then Finance Department head Bas Roorda in November 2010 concerning embezzlement in employment, theft and forgery at the Tourist Bureau office.

They were released days afterward and were told they remained suspects in the “Colade” investigation. Labega was given a leave of absence by then Minister of Tourism Franklin Meyers after the investigation started at the Tourist Bureau. She was later appointed as Airport SXM Chief Executive officer (CEO).

Her leave of absence from Government service was to expire in 2016, however, she applied for a Government position just before the expiration date. Government appears to have been forced to honour the leave of absence given by the Minister back in 2010. Labega currently works under Ministry of Economic Affairs Secretary-General Miguel de Weever.

This newspaper forwarded several questions to acting TEATT Minister Raphael Boasman about Labega’s new position. Ministry of Justice Public Relations Officer Fernando Clark answered on behalf of Boasman and said Labega had started working as a policy advisor in the Economic Affairs Department as of January.

On the matter of the open criminal case against her, he stated that Labega had been on leave of absence and just before it expired she had applied for a position within Government. “That’s all I can say at this time. More information about this matter will be given by the Minister on Wednesday during the weekly press briefing,” Clark said.

The position of Airport CEO was left vacant by Labega, who was CEO from July 1, 2011, until July 1, 2016. The Airport Board of Directors decided not to extend Labega’s contract due to her legal troubles which dated back to her days at the Tourist Bureau.

The National Detectives Agency has been busy with a long-term investigation against the staff of the St. Maarten Tourism Bureau. The Agency conducted house searches at five different locations on October 15, 2015.

This investigation, called Colade, is now almost completed. This newspaper understands the long duration of the investigation is due to the fact that a lot of information had to be obtained from abroad and its analysis has taken much time. In addition, the National Detectives Agency had a very limited capacity, in particular when the investigation started, and was constantly confronted with other big investigations.

The case against a fourth suspect in the Colade investigation, Edward Dest (51), was already brought before the judge on March 25, 2015, when he was sentenced to a symbolic one day in jail for “complicity in the deliberate misappropriation of money or monetary instruments as an official.”