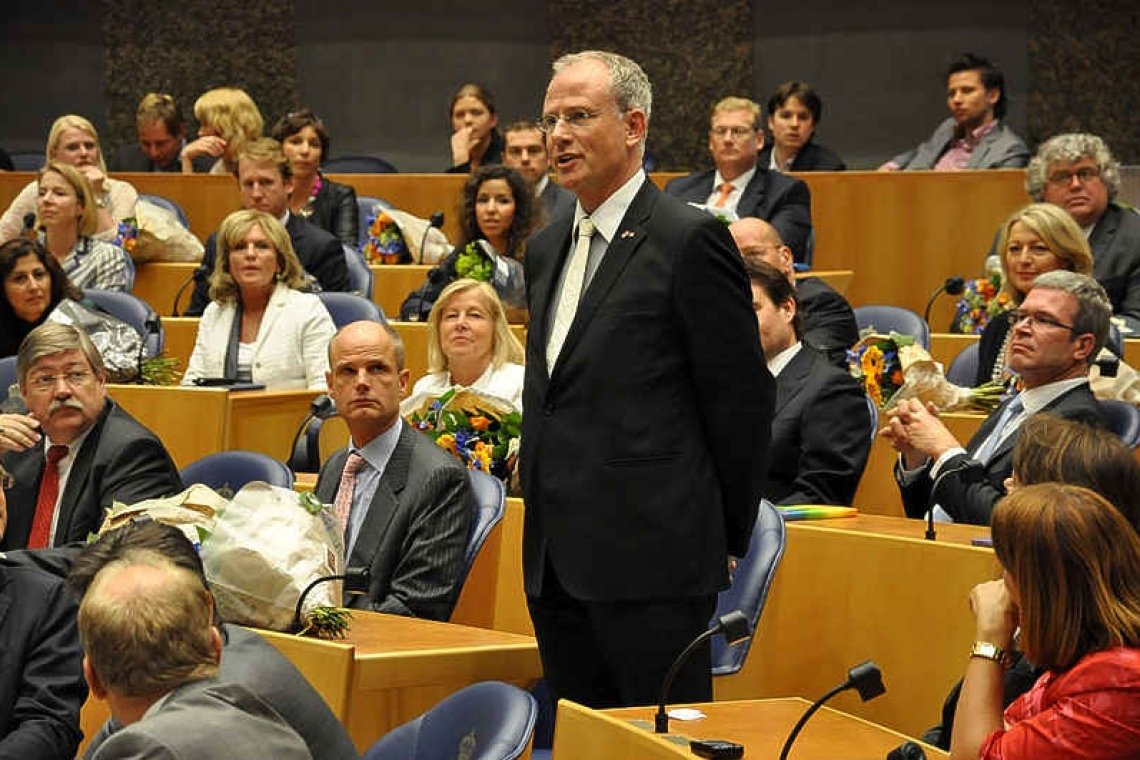 Former Minister Atzo Nicolaï during the installation of the new Second Chamber in June 2010. (Suzanne Koelega file photo) THE HAGUE–Former Minister of Administrative Reform and Kingdom Relations Atzo Nicolaï, the man who managed to realise an agreement with the six former Netherlands Antilles islands late 2006 that would later result in the new constitutional relations within the Kingdom, passed away last Wednesday at the age of sixty.

Nicolaï was recently diagnosed with a highly aggressive, untreatable form of cancer. On the islands, he is mostly known for being the Dutch politician under whose guidance the November 2, 2006, accord was signed with Curaçao and St. Maarten in The Hague. This accord paved the way for the two islands to become countries on October 10, 2010.

A month earlier, on October 11, 2006, he signed a separate accord with Bonaire, St. Eustatius and Saba, also in The Hague, to have the three smaller islands attain direct ties with the Netherlands.

Nicolaï only served six months as Minister of Administrative Reform and Kingdom Relations, from July 7, 2006, to February 22, 2007, but in this short period, he secured a political accord that would have a great effect on the daily lives of the people on all six islands. For this reason, The Daily Herald named him Person of the Year on December 30, 2006.

“This minister is open for business,” he told the media on several occasions in 2006. This was a new sound for the Dutch Caribbean politicians who had tried, mostly in vain, to get the Netherlands to agree to split up the Netherlands Antilles and to redesign the constitutional relations within the Kingdom.

When he took over from his predecessor, Minister Alexander Pechtold, Nicolaï was determined to accelerate the constitutional process and arrive at an agreement with the islands quickly. He started with Bonaire, St. Eustatius and Saba, whose interests at that time didn’t weigh heavily when it came to working on new constitutional relations.

One week later, the Bonaire, Statia and Saba delegations met with Nicolaï in Bonaire to iron out the rough edges in anticipation of the signing in The Hague on October 11. Having done business with the three smaller islands, which in October 2010 would become public entities of the Netherlands, Nicolaï wanted to get together with Curaçao and St. Maarten right away.

The minister travelled to the islands late October for talks with Curaçao and St. Maarten, and a week later, the parties met in The Hague where, an accord was signed after three days of negotiations.

St. Maarten’s Island Council ratified the accord, and so did the Island Councils of Bonaire, St. Eustatius and Saba. The Curaçao Island Council rejected the accord. Determined to continue with the islands that had said yes, Nicolaï travelled to St. Maarten and Saba in January 2007. One month later, the Balkenende III government fell and State Secretary of Home Affairs and Kingdom Relations Ank Bijleveld-Schouten took up the baton.

Political leaders expressed much praise for Nicolaï after the October and November 2006 accords. Commissioner Sarah Wescot-Williams, who led the St. Maarten team, commended him for his zeal, his enthusiasm and for sticking to promises. Saba Commissioner Johnson said that if it were not for Nicolaï, there would not have been an agreement. Statia Commissioner Hooker said at the time: “He did a good job. I have to give him that.”

Dutch Prime Minister Mark Rutte stated on Friday that he was deeply saddened by Nicolaï’s death. “[He was – Ed.] a trustworthy politician with always an eye for the content. At the same time, he had a sharp political sense. But above all, Atzo was a pleasant person whom I will greatly miss. I wish his family much strength,” Rutte stated.

Nicolaï worked as chairman of the Rotterdam harbour entrepreneurs’ organisation Deltalinqs and chairman of the Rotterdam Port Promotion Council from January 1, 2020, until he was forced to resign early August when heard he had cancer and could not be treated anymore. Before his Rotterdam functions, he worked as President of the Dutch chemical and biotechnological company DSM from June 2011 until October 2019.

Nicolaï started his political career as a Member of the Second Chamber of the Dutch Parliament for the VVD party in 1998. From 2002 to 2006 he was State Secretary of European Affairs in the Balkenende I and II governments. After his short tenure as Minister of Administrative Reform and Kingdom Relations, he returned to the Second Chamber where he served until 2011.

Nicolaï was an avid birdwatcher and during his first visit to Saba in 2006 he made sure to make time available to watch the magnificent red-billed tropicbird, a unique seabird that largely nests on Saba. He spent the last weeks of his life with his wife Hilde and his three children at his home in Amstelveen.  Nicolaï will be laid to rest in Amsterdam this Saturday.