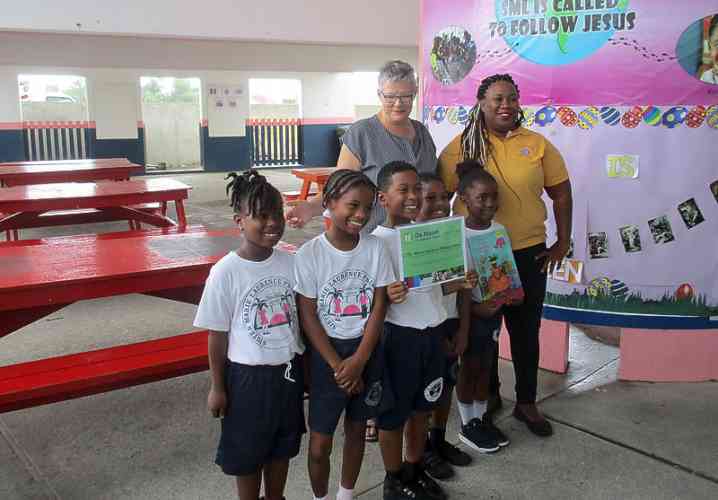 MIDDLE REGION–Philipsburg Jubilee Library partnered with former librarian Barbra Arrindell and her husband archivist Julian Arrindell as they donated funds that were raised by Christian Dalton Primary School De Maten in Den Ham, the Netherlands, where their grandsons go to school.

The donation of US $600 was collected at the request of De Maten’s School Director Jenny Valk and meant to be donated to a school that was in dire need of some assistance after the passing of Hurricane Irma on September 6, 2017.

St. Maarten archivist Julian Arrindell was born and raised in Middle Region. As a proud grandfather, he opted, together with his wife, to assist their grandchildren’s school by bringing the funds to St. Maarten to be donated to a school in need.

After hearing that the school in his district had been severely damaged by the storm, the logical choice was to assist Sister Marie Laurence School. The school building is damaged in such a way that it must be demolished and rebuilt, hopefully by the next school term. Group one, four, seven and eight are temporarily being housed at the five other Catholic schools in St. Maarten.

“Some of the 198 students are still with family members in the Netherlands. It is very difficult for many children to deal with the trauma and the consequences of the aftermath of the passing of the hurricane. Some have really suffered and are being taught separately, while others can handle it better. However, in unexpected moments strong emotions are released,” Wattley told the Arrindells.

“One of our main priorities is the well-being of our students and because it is, we find it important for the children to share their feelings with each other. Every month,

all students, including those at the other locations, come together for a day at the Sr. Marie Laurence School premises because it is important that the children can share their experiences. There is also a Skype connection with the children in the Netherlands.”

The monetary donation will go towards purchasing their mascot “PB Rex” that had been stolen during the looting and vandalism directly after the passing of Irma. PB Rex represents the school programme for Positive Behaviour Support in which students receive a token for good and positive behaviour. With 10 tokens, a student has earned a place on the monthly “Wall of Fame” and they also receive encouraging bracelets.

The students are “crazy” about PB Rex and the bracelets, but unfortunately, these both disappeared in the aftermath of the hurricane. The funds will be used to purchase a new mascot and bracelets.

The money was handed over to the students and teachers of the school by the Arrindells and Powell on Wednesday, April 18. In addition, students were treated to a storytelling session and the school received three cases of Dutch books.