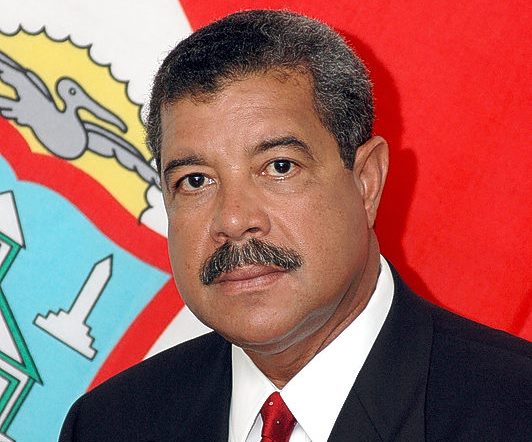 PHILIPSBURG–Former Member of Parliament (MP) Petrus Leroy de Weever (62) was acquitted by the Joint Court of Justice on Wednesday, of the theft of blogger J.R.’s tablet during an altercation on Front Street on January 11, 2014.

The Court of First Instance had found De Weever guilty and sentenced him in November 2015, to payment of a NAf. 750 fine. He had filed for appeal as he claimed the allegations levelled against him were not true and based on “totally fabricated facts,” De Weever said during the August 25 hearing in this case.

The lesser Court had found the case proven, based on statements by the victim and a witness, and on evidence provided by security camera images.

The Prosecutor’s Office had requested that the Court sentence the senior politician to payment of a fine or spend 15 days in jail in case of non-compliance.

In its verdict, the Appeals Court established that there had been a discussion between the defendant and the blogger. Based on the case file and on the appeal hearing, however, the Court did not find it legally and convincingly proven that the suspect had been guilty of stealing the blogger’s tablet on that day.

During the appeal hearing, the presiding judge said this was a typical case of the victim’s words against those of the defendant. De Weever confessed that he was angry with the blogger that day as she had been harassing his daughter, who has a business in Front Street.

De Weever explained that the case stood not on itself, but was the culmination of a long history of harassment by the blogger, who had likened him to Saddam Hussein and Adolf Hitler, and who had claimed his daughter would be opening a brothel.

Solicitor General Anton van der Schans said, on behalf of the Prosecutor’s Office, there was sufficient legal and convincing evidence to consider the case proven and dismissed statements that on the images De Weever’s had no tablet but something else in his hands. He called for confirmation of the initial verdict.

The Court of Appeals, however, said that from the camera images and other evidence it could not be ascertained that De Weever had taken away R.’s tablet or that he had held the device in his hands, which led the Court to the conclusion that theft could not be proven.

De Weever’s lawyer Geert Hatzmann had called for his client’s acquittal, adding that the blogger pressing charges against his client may be typical behaviour for a “psychologically unstable and vengeful victim, who is arguably lying.”
Source: Daily Herald
Former MP acquitted of stealing blogger’s tablet