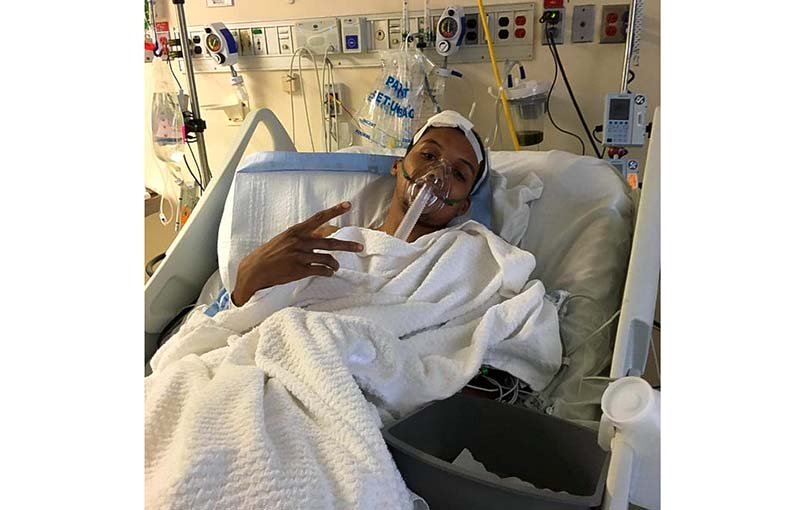 Fernelin Encarnacion was wounded in the Wednesday shooting — but the damage would likely have been fatal had his backpack not absorbed the brunt of the shot.

NEW YORK/PHILIPSBURG–Former St. Maarten resident 22-year-old Fernelin Encarnacion cheated death while avoiding the raindrops, pulling a leather Jordan backpack over his head to stay dry and thus dodging a bullet that tore into the red and black bag — instead of deep into his forehead in the Bronx, New York on Tuesday.  According to Nydailynews.com, the victim was walking barely a half block from home when his attention suddenly shifted from staying dry to staying alive. “I was using the bag as an umbrella,” the fortunate survivor told the website from his St. Barnabas Hospital bed. “When I reached Davidson Ave., I turned right. I did four steps and I heard ‘Pop!’ and (the bullet) was on my head and I fell.”

Police recovered four 380-caliber shell casings from about a block away, leading them to suspect Encarnacion was not the intended target of the gunman. A broken gold chain was found near the casings, police said.

The young man, who moved to the Bronx last year from St. Maarten, felt warm blood on his forehead as he flagged down a passing police car.

“You know something?” an astounded police officer told the bleeding man. “You’re a lucky guy.” The decelerating slug popped him right in the forehead, breaking the skin without entering his skull. He had taken the day off from his job working at a Quik Park at Penn Station to get three teeth removed by his dentist. Encarnacion knew immediately that he was hit.

“I asked (the officer), ‘Is this a real bullet?’ ” he recalled. “’Cause it doesn’t feel like it. It didn’t go in. I didn’t feel it.” His sister Pamela, 24, rushed to the shooting scene to make sure her little brother was all right. He’s talking a lot,” she told The News. “Now he wants to go to Miami to take a vacation. But he’s good, thank God. It’s a miracle.”

Pamela said her brother had previously survived a bicycle accident in which he fell and suffered a massive concussion. Fernelin had one request for his sibling: Go back and recover his lifesaving backpack. The bag is apparently in police custody, and the family intends to bring it home. “He was asking me if it had a hole,” Pamela said to the website.