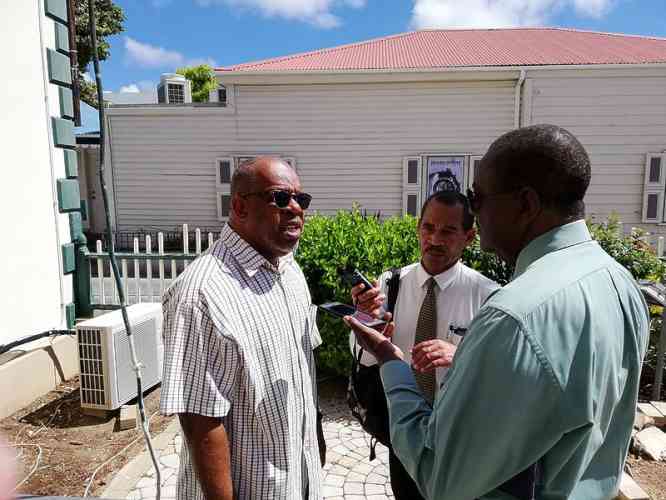 EUSTATIUS–Government Commissioners in St. Eustatius Mike Franco and Mervyn Stegers should be relieved of their duties and the legitimate Island government restored immediately. These are the main subjects of an injunction filed in the Court of First Instance in St. Maarten by former Island Councilman and leader of Progressive Labour Party (PLP) on Wednesday.

The injunction comes at the heels of a lawsuit filed by these five litigants. The hearing of the lawsuit, which was set for October 23, was postponed on the Dutch government’s request until November 20, as attorney-at-law Charles Rutte of HBN Law requested additional time to prepare the case.

As the five politicians did not want to wait until justice has run its course in the main case, they filed an injunction in their bid for the government’s commissioners removal and their immediate reinstatement as the “legitimately and democratically elected” government of Statia.

The former island government initiated legal action against the Dutch government and issued an ultimatum to undo at least a number of what it considers illegal acts by Monday, October 29. As this did not happen, the five litigants filed the injunction to force the Dutch government to retract the Temporary Law Task Neglect (“Wet Tijdelijke Taakverwaarlozing)” St. Eustatius.

On February 7, the Dutch Parliament adopted the Temporary Law, which according to litigants, violates the UN Charter. According to them, the UN Charter supersedes national law. They claim that the temporary law should be retracted as they consider it a violation of the right to a full measure of self-government as laid out in the UN Charter and UN resolution

Van Putten said Wednesday that Statia’s legitimate government was deposed based on “melee, gossip and innuendos.” He also said that during the Town Hall Meeting which was held “the same day when the temporary law came into force, people said they wanted to go to the polls, but the request was not heeded by The Hague.”

According to Van Putten, this is extra embarrassing for the Dutch government, as the Netherlands is a member of the UN Security Council this year and has also chaired Security Council meetings for some time.

“It is unacceptable that the government of the Netherlands acts as an international rogue state by using Dutch law to trample on democracy and circumvent and violate international treaties and laws it has pledged to uphold,” Van Putten said in a statement Sunday. The Court hearing in the injunction will be taking place in Statia, but no date has been set as yet.