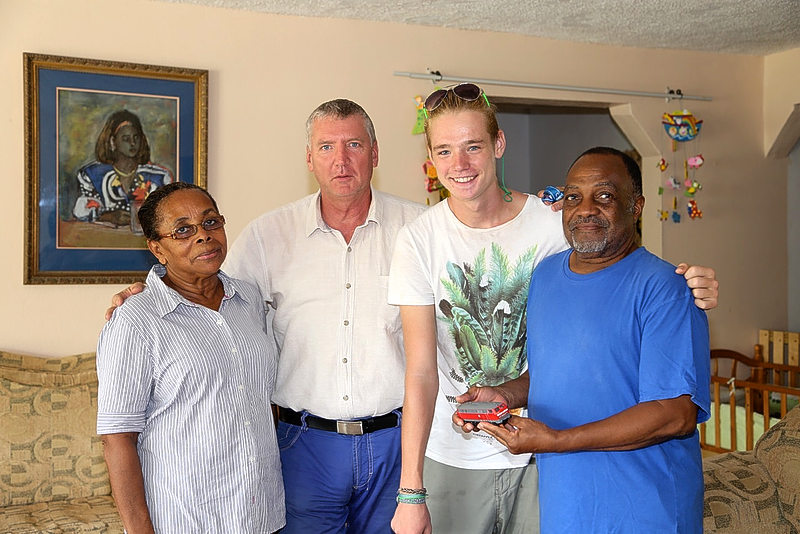 The family, who left the island on Sunday to return to the Netherlands, donated a train set, complete with 200 meters of track, five locomotives, numerous wagons and accessories such and buildings, trees and props to build life-like scenes to amuse, entertain and help educate the children about a means of transportation they probably have not seen in real life.

The train set was packed into five boxes and according to Mazereeuw; it has given many hours of pleasure to his family over the years and holds a lot of sentimental value. Father and son were pleased that it could also bring a lot of happiness to the children of the children’s home under the charge of home director Sally Benjamin.

The train set was delivered to the home with instructions on how everything fits together. Also included in the delivery was a box of model racing cars for some the older foster children who may wish to start racing them with Reggie Corum’s St. Maarten Model Racing Association.

“We would have loved to set everything up before leaving, but we just ran out of time,” the father and son said. “We are sure they will enjoy the train set and will have a lot of fun working with their imaginations about their own train journeys around the track.”

The son said although he and his father discussed making the donation, it was still a tough decision to make. He, however, knew they had made the right call when they visited the children’s home and met the children themselves.

New Start Foundation thanked the family for the donation noting that the gesture was a very kind one indeed. “To think they have had this in their family for so many years and that they would donate their collection to our children is very generous, and we want to thank Peter and his family on behalf of the children,” New Start representative Sally Benjamin said.

The family returned to Rotterdam on Sunday, where the father will soon be taking up a new teaching post at Rotterdam University. He said he will miss St. Maarten and the many, many friends he had made over the years as a teacher, as well as being a programme manager for government, a businessman dealing with automation systems, a head judge for the St. Maarten Spelling Bee, a Foresee Foundation (DigiKidz and DigiWorkz) representative and a member of the Rotary Mid-Isle club.

“Matthijs and I did a lot of work with the Heineken Regatta and also with the Spelling Bee working behind the scene with the scoring and setting up the computer systems, and I have also worked along with many organisations and different people on the island,” the father said. He says he is leaving the island with his family for the second time, having left once before in 2000 after experiencing a number of hurricanes, only to return after 10 years to help building up of Country St. Maarten.

“This time around I will be taking on new and exciting challenges back in the Netherlands and the children will also be taking up higher levels of study” said the proud father. He says he has spent the best part of the past month saying goodbye to everyone and apologizes to anyone he may have missed out.