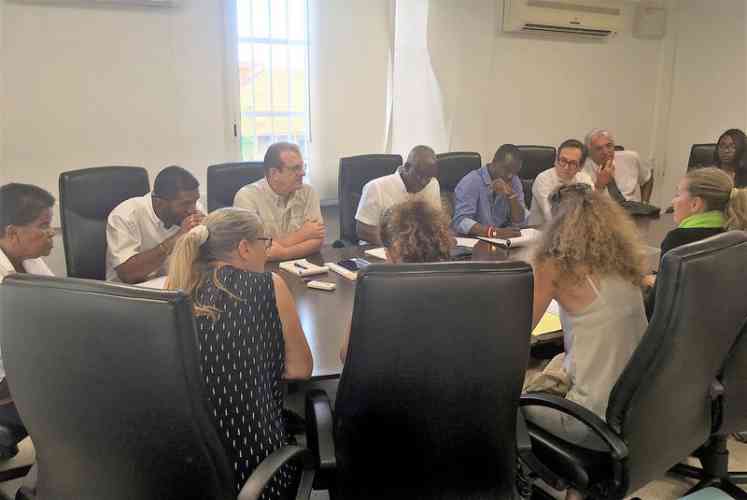 After the first meeting, which took place on site last week Friday, the Collectivité said in a release it was a question of making a technical point on the situation of the two establishments of the first degree, in the presence of National Education Services Deputy Academic Director Michel Sanz, Inspecteur de l’Education Nationale (IEN) des îles du Nord Dominique Boyer, school directors, elected officials and technicians from the Collectivité and Caisse Terrirtorial des Oeuvres Scolaires (CTOS)
To put an end to the postponed teaching hours in these two schools, the Collectivité has undertaken to do work to allow the re-opening of four classrooms in the Ghislaine Rogers nursery school as soon as the Easter holidays begin (April 9, 2018). In addition, the Collectivité will reassign two rooms of Elie Gibs Elementary School to teaching, to free one wing of the building and continue re-construction work at the school. These works (roofs and interior fittings) will be completed during the Easter holidays.
The Collectivité and CTOS have also announced the re-opening of Ghislaine Rogers School’s dining room. The canteen will be open to students of both schools. To the extent that the technical and safety conditions would be met, the Collectivité has undertaken to re-open the refectory before the Easter holidays.
Said Vice-President Nyuiadzi, who wishes to continue the dialogue with schools alongside Vice-President Annick Pétrus: “This meeting was particularly constructive, with concrete solutions proposed to parents and teachers.”
The rehabilitation work on these two schools and other schools will be completed during the summer holidays, with the Collectivité making every effort to have a successful start in September.