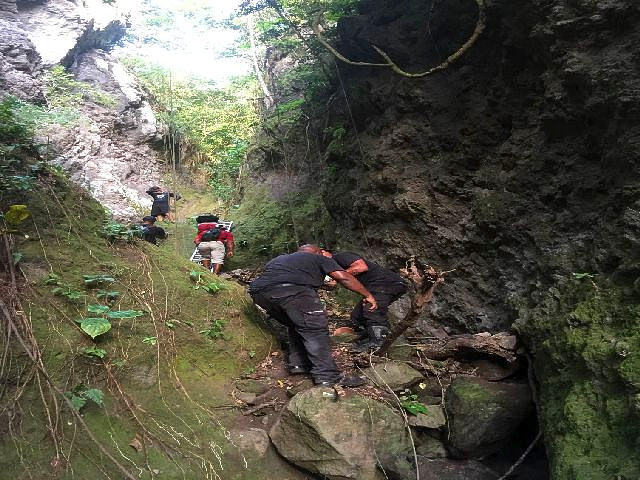 SABA–The Caribbean Netherlands Police Force KPCN was notified Monday around 8:00am that three men and one woman with American and Canadian nationality were missing after they went hiking on Mary’s Point Trail on Sunday afternoon.

The police, in collaboration with the Fire Department and Saba Conservation Foundation (SCF), carried out an extensive search for the four hikers. The search extended well into Monday night and the hikers were all found around 9:00pm.
The hikers started on Sunday afternoon on Mary’s Point Trail from where they veered off the trail ending up in a ravine on the Northeast coast known as Well’s Bay Gut.
Relatives of two of the hikers called the police after attempts to contact them had failed. A meeting was held immediately at the Fire Station in The Bottom to establish how the emergency services would handle the search and rescue.
Saba Fire Department Commander Julio Every was appointed leader of the mission. Three teams were formed consisting of members of the Police and Fire Departments and Saba Conservation Foundation.
Experienced hiker with extensive knowledge of Saba’s trails Peter Johnson was asked to join the operation. Chris Meijvogel’s assistance also was enlisted to help with his drone. This equipment was used to do a flyover to help emergency services establish in which area to focus the search.
Island Governor Jonathan Johnson was kept abreast of progress throughout the search.
Harbourmaster Travis Johnson and Saba Bank Management Unit assisted in the search by boat.
The first two hikers were found in the early afternoon and they roughly described where the other two were. They had veered off the track and were in a precarious position on a cliff. 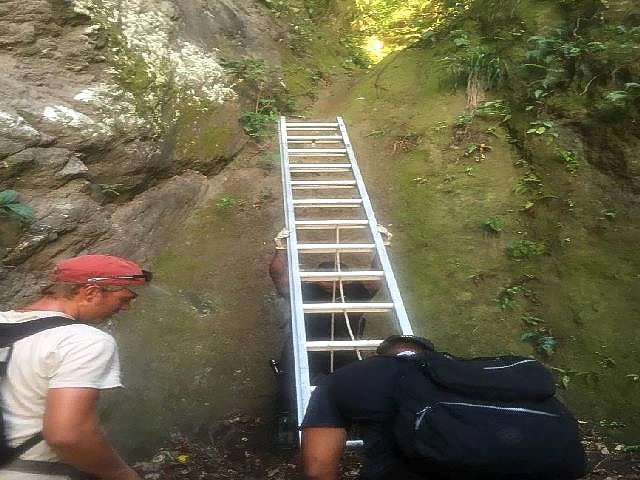 The search party found the last two hikers after a few hours in the late afternoon. After assessing the area it became evident that ladders and other rescue gear would be needed to get them down.
The search then turned into a rescue and with the help of the guides and the gear the last two hikers were safely returned to the trailhead around 8:50pm.
The hikers were very tired, but thankful to have been rescued. All four persons went to A.M. Edwards Medical Center for observation. They were treated for minor bruises and released thereafter.
Everyone stated that the signposting on Mary’s Point Trail was in good order. Saba Conservation Foundation’s Manager Kai Wulf is advising first-time hikers planning to go on the trails managed by SCF to first establish contact with the Trail Shop in Windwardside for proper instruction and trail-condition updates.
“Due to the dangerous terrain, the entire North Coast Trail is closed, including Mary’s Point, and should only be accessed with a professional guide,” stated Wulf.
“Although we proudly boast our trails, we always recommend that hikers let others know when they are going and when they can be expected to return and where they are going. There are also a number of trails which are only recommended to go on with a guide. SCF provides this information and we implore everyone to be safe.
“The emergency services and volunteers who assisted with the search and rescue are to be commended for their teamwork. Saba may seem small, but we must never underestimate her landscape and risky terrain,” said Governor Johnson.