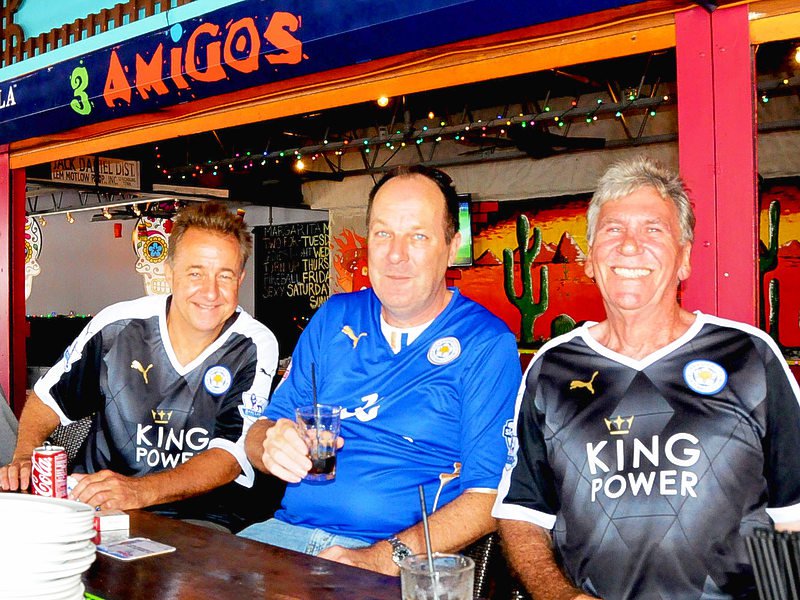 There are foxes on St. Maarten and indications are the pack is growing! John Davis is the group leader. “I am Leicester born,” he says with pride.
He was born in Leicester and grew up in the hamlet of Kirby Muxlow on the outskirts of Leicester.

Leicester City has a football team. Until recently they have not had much respect. Before the team was nicknamed the Foxes they were called the Fossils as they played on a pitch located on Fosse Road in the Mid-lands of England. The team moved to a stadium on Filbert Street in 1891 and their named changed to The Filberts.
The name changed again around 1948 when they were called Foxes as the area had been prime fox hunting venue.
From about 1930 on the team ran onto the pitch to the familiar sound of a trumpet announcing the sighting of a fox.
Leicester City just won the top league championship for the first time in the club’s 132 year history.
The accomplishment is being hailed as the Cinderella story of all time in all sports. At the start of the season last August British gamblers put the odds of Leicester winning the championship at 5,000 to 1. Bookies gave better odds that the Loch Ness Monster would be found or that Kim Kardashian would be elected president of the United States. The odds were only 2,000 to 1 that Elvis would turn up alive and well.
It was about even money that Leicester would lose most of their games and be relegated back to the lower division. “A lot of people were surprised this season,” said Davis. But we saw something last season. The team came together. They won seven of their last nine games.”
The St. Maarten Foxes are a few of Davis’ friends he watches the games with.
Simon Knecht is Dutch and has been a Leicester fan since 2010. He has one of the older kits to prove it. “I am from near Amsterdam so you know who I support in the Dutch League,” said Knecht. It’s good he is also a Leicester fan. The day after the Foxes hoisted the championship trophy of England Ajax blew a chance to be the Dutch Champions allowing PSV to grab the trophy.
“I became a fan due to John,” said Knecht. “We watch games occasionally at 3 Amigos, if work and broadcasters permit.”
Only after the team rose to the top did they catch the attention of US broadcasters and were on TV (NBC Sports) more frequently.
At the end of the season they did the math. “If Leicester could keep winning seven of nine games they might be a contender.”
The group was not thinking first or second place which could result in an appointment to the Champions League. They were dreaming of third or fourth and maybe a spot in the Europa competition.
“You know, Manchester United spent more on players in the past two years than Leicester has in all 132 years it has been a club.” Most of the top spending teams have one player whose salary is larger than Leicester’s entire payroll.
The group laughs as they recall something famous Dutch footballer Johan Cruyff is quoted as saying: “I never saw a bag of money score a goal.”
Also watching is Brett Mucklow, known as Lord Muck of the Mid-lands. “I am from the Mid-lands and a regional supporter.” That means he roots for any team from the region when they play any of the city teams.
Davis went to his first Leicester game at the age of 10. He and Mucklow discussed pence, crowns and halfpennies before deciding back then a ticket to a game was about the equivalent of a US quarter.
Now the price is 50 to 100 pounds and may be going up as the Foxes will play in the Champions League next season.
Also at 3 Amigos watching the game on Saturday were new recruits 11 year old Safin Bashir and Terrence.
“In the Mid-lands watching the game either at the stadium or the local pub was a big social event,” said Mucklow. “People looked forward to the game all week and if the team won they had a good week and if they lost, the town was depressed till the next game.”
“I think the team’s success is that they do not have superstars,” said Davis. “They have to work together and help each other to win.” He bases his theory on the fact that the stats say the Foxes only possessed the ball about 42 per cent of the time this season.
Some of the big name players are lazy. They do not run back on defence. The Foxes let their opponents come in.
He continued to explain that as the team builds up they bring men forward, the foxes steal the ball or intercept a sloppy pass and then rifle it down field on a counter attack.
What about next year?
The group hopes the team will stay together. They all admit the big spending clubs will surely be looking to cherry pick.
Saturday the group watched the Foxes defeat Everton 3-1. It was 2-0 and Davis and company were celebrating and boasting: “This just proves the championship was not an accident!”
As for the last game of the season against Chelsea, maybe the boys will be nice to coach Guus Hiddink. A Dutchman, who was named interim coach in December and will be replaced soon.
Yet the Foxes may show no mercy as their coach Claudio Raneiri was sacked by Chelsea after reaching runners-up position in 2004, the highest position in almost 50 years. That year Chelsea was taken over by the Russian billionaire Roman Abramovich who hired Jose Mourinho. After winning the Premier League Mourinho left Chelsea for a couple of other clubs and returned later in 2014. He himself got sacked in December after Chelsea lost 2-1 to Leicester.
“The predecessor beat his successor,” said Knecht.
Thus far the Foxes have played 37 games. They won 23, drew 11 and lost only three.