Home Local News Frans: When elected, US Party will represent all people 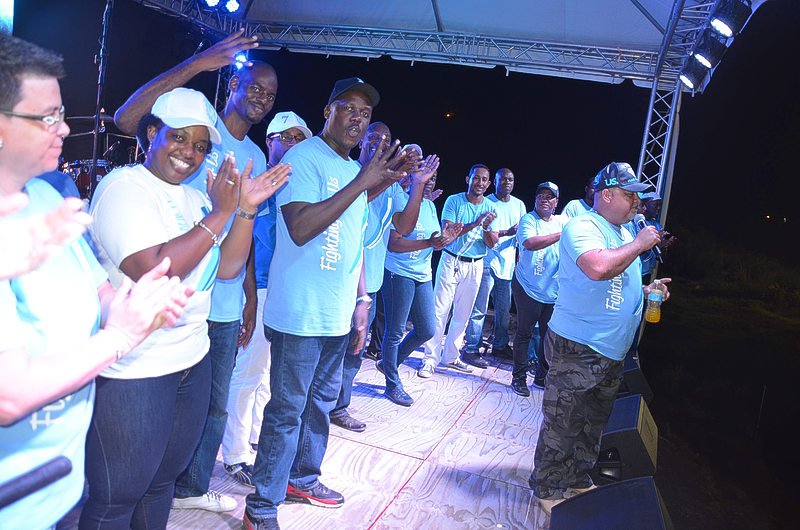 PHILIPSBURG–The United St. Maarten (US Party) attracted a large crowd on Saturday night for its final public rally, anchored by its candidates who stuck to and re-iterated its main campaign theme; the US party is a family of leaders, who have displayed its ability to govern when it received the opportunity to do so in January 2016, and is prepared to continue doing so with the blessing of the people of St. Maarten.

The final rally was held opposite the Causeway Round About in Cole Bay, and, besides addresses by candidates, featured performances by island artists K-Wyse, Addison “Shadowman” Richardson, who composed US Party’s campaign song, St. Maarten’s very own Impak Band alongside Impact Band from Aruba. International performing Latin superstar artist Tito El Bambino closed the evening with his hit songs.

Party leader Member of Parliament (MP) Frans Richardson thanked everyone he has met personally on the campaign trail, as well as the hundreds of people who he says took the time to send messages, visit the headquarters, attend public meetings and pass on best wishes. He said the US Party is looking forward to once again serving the people of St. Maarten.

Richardson described the party as an organization with a very simple principle of putting people first. He said, though this may sound cliché, his party has “walked the walk” when it came to producing through the Justice Ministry over which it has political responsibility for, and will move vital pieces of legislation through Parliament when elected.

The MP also stressed on the party’s policy of inclusion for all. “We don’t exclude anyone. If you have the best interest of St. Maarten in mind, and you want to make a genuine, positive contribution to this country, you are welcomed in the US Party,” Richardson said.

“We cannot ask Dutch residents of all nationality/ethnic backgrounds to vote for us, then turn and exclude them because in the opinion of others their background disqualifies them from being able to have the best interest of St. Maarten in mind,” Richardson went on to state at the meeting.

Richardson, surrounded by party candidates, board and advisors, thanked President of the party Cecil Nicholas for his hard work in guiding the party. He also thanked the PR and Marketing team led by Mike Granger and Julian Lake, Minister of Justice Edson Kirindongo for his accomplishments at the Ministry of Justice, the advisors who worked with the candidates to get them prepared and “everyone else who has helped shape the direction of this party in one way or the other.”

It was also announced by MC Fernando Clarke that, should the possibility arise for Richardson to assume the mantle of Prime Minister of St. Maarten, he will accept the position and serve his people honourably. The announcement received loud cheers from the crowd.

“Now we go to the polls. This party is just two years old. We have built this political organization with patience and fortitude. We have been betrayed along the way, but we persevered, and tonight you are standing with US Party as we move to cast our votes to get a chance to move this country forward. We need you. We need your votes.” Richardson closed off in his address.

Source: Daily Herald
Frans: When elected, US Party will represent all people