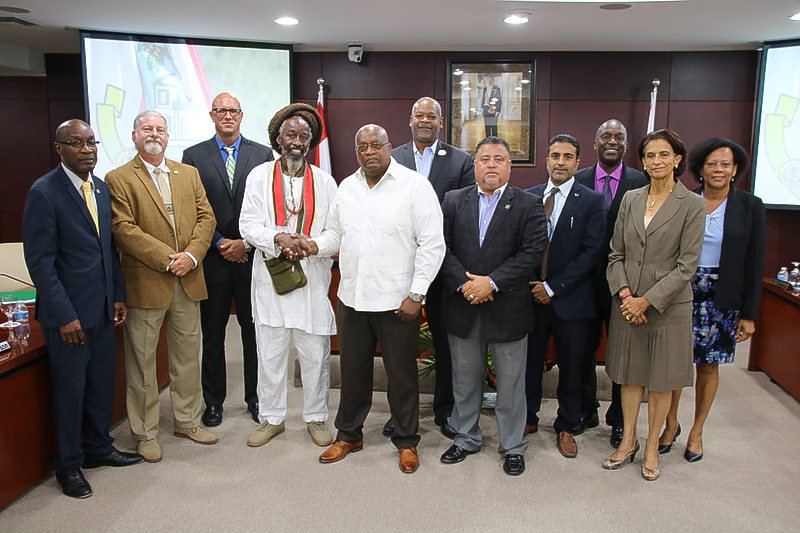 PHILIPSBURG–Freedom Fighters Foundation finally had its day in Parliament on Tuesday to discuss the legalisation of cannabis for St. Maarten.

Foundation representatives President Roland “Ras Bushman” Joe, Dr. Jay Haviser, Dr. Dan Johnson and businessman Arun Jagtiani presented their plans to Parliament’s Justice Committee. They requested that Parliament organise a referendum and combine it with the elections scheduled in September. This way, the people can vote on whether they want to legalise marijuana or not.

Ras Bushman said in his opening remarks to the Members of Parliament (MPs) present: “Everybody is dealing with the marijuana issue all over the world. It’s time we come together with different experts. St. Maarten needs to deal with it and we need to start the discussion and this is the first step.”

Anthropologist Haviser said his presence at the meeting was to throw support behind the cause and inform the MPs about the history of cannabis.

“Cannabis was first introduced into the Caribbean by East Indian immigrants in the 1830s for medicinal use, as the plant has been used as medicine in Asia and the Middle East from the last 3,000 years until today. We have all seen the growing media coverage, from CNN to the American Medical Association, of the proven medical benefits of cannabis, as well as the many other uses of the plant.

“We are seeing the growing number of countries such as Jamaica, Canada and the USA recently that are making reforms in their drug policies in relation to cannabis. The point of this discussion today is to open public awareness to the significant potentials of cannabis, so that reforms can eventually happen here on the island as well,” said Haviser.

The Foundation informed the Justice Committee that the entire world was very rapidly changing negative attitudes on the issue of cannabis use and those countries at the cutting edge of reform would reap the greatest ecumenical and health benefits from a formalised structural control of cannabis, just as is currently maintained with medicine, alcohol and tobacco.

Haviser also suggested a local high-standard agricultural research station be built with both growing and laboratory features, with Government ultimately to control for quality standards-monitoring. All cannabis product distribution in St. Maarten would then be made from this facility after ongoing proper quality controls, to the local registered and licensed centres. With structured taxation and profit margins, this research facility could very quickly pay for itself, according to Haviser.

MPs Dr. Lloyd Richardson, Maurice Lake and Johan Leonard did not support the idea outright in their responses to the presentation. Richardson wanted a study done on mental health; if legalised, what consequences it would have. He believes that a thorough study has to be carried out before the discussion moves forward.

Leonard, a former policeman, said the crime aspect had to be considered. He vowed that he would never support the legalisation of the drug and believes it to be dangerous.

MPs Tamara Leonard, Theo Heyliger, Frans Richardson, Sarah Wescot-Williams and George Pantophlet were open to hearing more about legalising if it is done for medical use only. They believe recreational use is a whole other discussion.

Tamara Leonard said she was pro cannabis for medical use and that she had used medical marijuana as part of her cure while undergoing treatment for her illness.

“I have never smoked cannabis, but I cannot deny the medical use of it. I have a personal issue with just smoking it, but we need to wake up, and I am not jumping circles around it. This works and has medical use,” she said.

She called on the group to form a committee with doctors and experts to research the topic more and come back to present these findings. More research is needed, according to Leonard.

No final conclusion came from the meeting and the next step was not discussed.