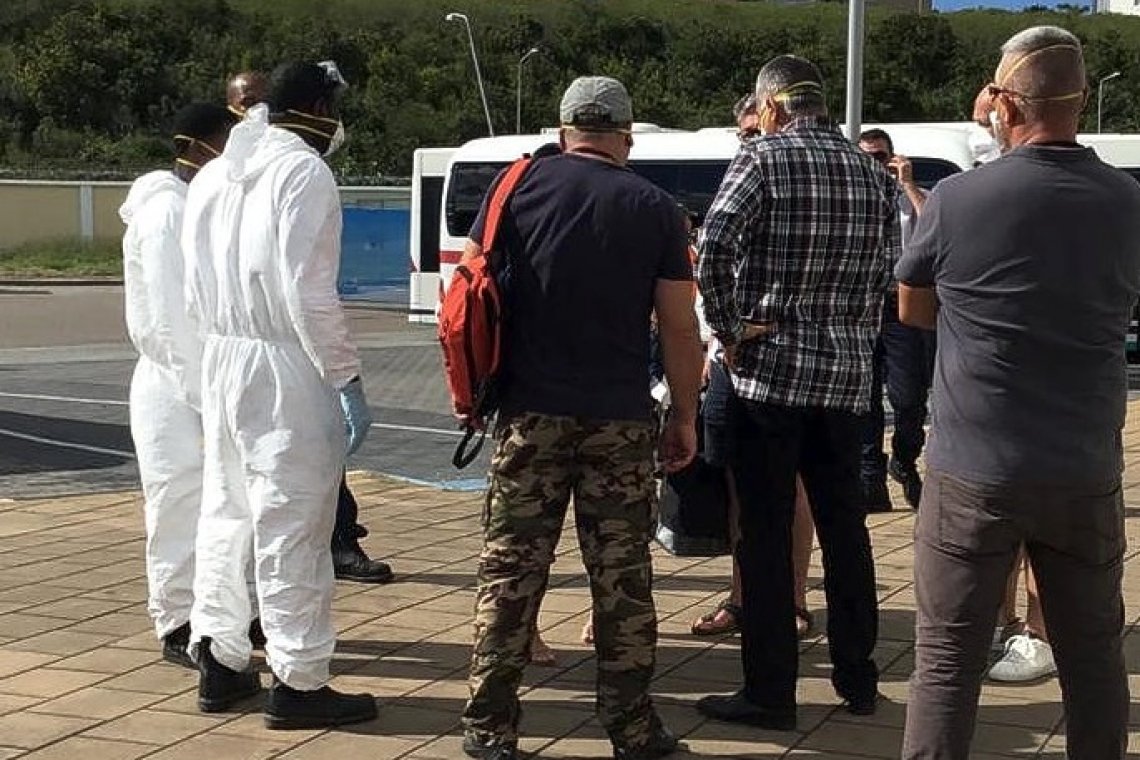 Gendarmes and RFF paramedics talking to the couple suspected of showing coronavirus symptoms.

AIRPORT–A French married couple was stopped by French and Dutch authorities at Princess Juliana International Airport (PJIA) because they were suspected of having symptoms of the novel coronavirus COVID-19. They were later transported to Louis Constant Fleming Hospital.

According to a report from PJIA’s Rescue and Firefighting Department (RFF), the couple travelled from St. Barths to Philipsburg, St. Maarten, on Friday morning via a ferry service. They arrived around 10:30am.

The couple intended to fly the same afternoon to Paris, France, on board an Air France flight that was scheduled to depart around 5:30pm.

At 2:47pm, PJIA’s Security Department received a call from the St. Maarten Police Force KPSM. The police told airport security they had been alerted by French authorities that the couple was suspected of showing coronavirus symptoms. Authorities have not explained what led them to that conclusion.

The airport then initiated its pandemic plan and the couple was apprehended by Gendarmes with the help of RFF’s paramedics. The couple was moved to the airport’s isolation room, which is placed at a remote location near the terminal building.

In the isolation room, RFF paramedics interviewed the couple and checked their vital signs. According to a press release issued by the airport on Friday night, the couple’s vital signs appeared normal and they did not have a fever, a cough, or were sneezing.

Authorities transported the couple to Louis Constant Fleming Hospital on the French side around 4:50pm. Up until press time, French-side authorities had not confirmed whether the couple actually had contracted the virus.

The couple initially arrived in St. Maarten on Friday, February 21. They were in transit to St. Barths.

“Togetherness is always required by both local police authorities and airline operators. We all should play our part toward accomplishing greater coordination of readiness measures, as we strengthen our awareness on healthy travel habits and, by extension, the novel coronavirus COVID-19. Our airport pandemic plan also addresses aspects such as coordination with local/regional/national public health authorities,” said PJIA Chief Operations Officer (COO) Michel Hyman.