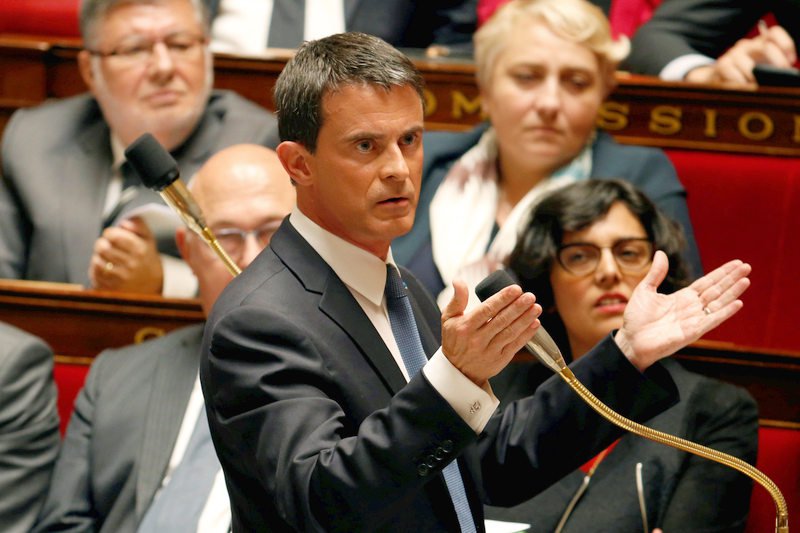 PARIS–Unable to put down a rebellion within their own ruling party, French President Francois Hollande and his Socialist government on Tuesday opted to force unpopular labour market reforms through the lower house of parliament without a vote.

Prime Minister Manuel Valls announced the move after the collapse of talks with rebel Socialist lawmakers over the bill, which seeks to make hiring and firing easier. It follows weeks of trade union and student-led street protests.
“It is my duty to move forward and make sure this text is adopted,” Valls told parliament after an emergency cabinet meeting.
“I won’t apologise for this: this bill is good for businesses and it is good for workers,” he said, as opponents of the bill booed and fellow ministers applauded in support.
The decision to invoke special constitutional powers underlines the deep rifts running through the ruling Socialist Party a year ahead of presidential elections and Hollande’s own weakness ahead of declaring whether he will run for re-election. “It’s a heavy-handed way of using the constitution to prevent the nation’s representatives from having their say,” Laurent Baumel, a rebel Socialist lawmaker told reporters, calling the decision “anti-democratic”.
Hollande’s move not to compromise with his own legislators sends a signal to international investors and ratings agencies, who have for years pressed for more pro-market reforms in the euro zone’s second largest economy. But it also exposes France’s most unpopular leader in recent memory to a vote of confidence, quickly called by opposition conservatives.
A no confidence vote by lawmakers in the lower chamber on Thursday would dissolve Valls’ government. However, despite the divide within the party, the government is expected to survive.
Lawmakers to the left of the Socialist Party said they would try to gather enough signatures to put forward their own no-confidence motion.
The option to push legislation through by decree is made possible by a rarely used clause in France’s constitution – known as 49.3 – which underlines the strong powers wielded by the executive under France’s presidential system. It is the second time in as many years Hollande and Valls have used the clause, having last year rammed a law through parliament which loosened up Sunday trading rules and regulations in the transport and legal sectors.
France has some of the most protective labour regulations in the euro zone. The government says the proposed legislation will encourage companies to hire and bring down a jobless rate that is stuck above 10 percent.
Although Valls diluted parts of the labour bill in March, the bill retains measures giving more flexibility to employers to agree in-house deals with employees on working time. It also offers companies less restrictive conditions for layoffs made for economic reasons.
Hollande has said he will only run for a second term if he succeeds in creating jobs. Government opponents said Hollande’s time was up. “We are witnessing the slow but certain demise of the government,” conservative lawmaker Eric Ciotti told reporters.