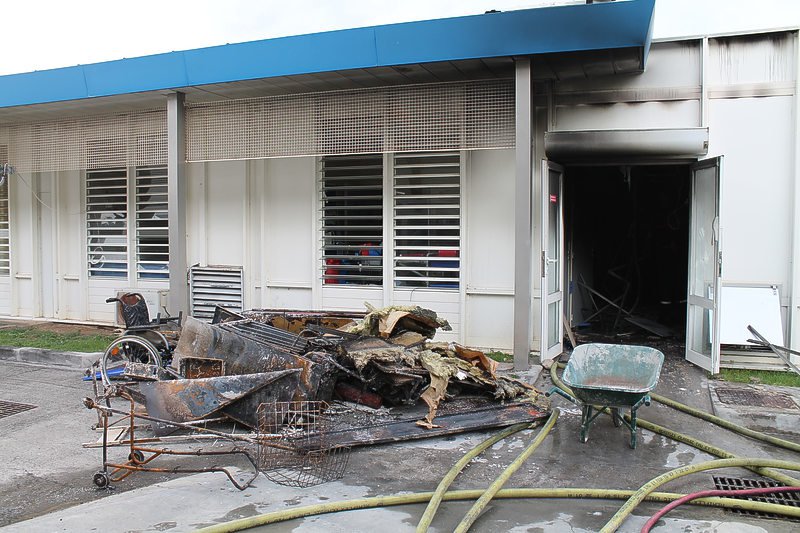 MARIGOT—A suspected electrical fire in a stockroom at the Louis-Constant Fleming Hospital on Sunday resulted in a rapid evacuation of the Emergency, Maternity, Paediatric, and General Medicine wards, totalling around 20 patients.

There were no immediate reports of any injuries, from smoke inhalation for example, by press time following the evacuation.

Nurses were seen wheeling patients in their beds away from the building to the relative safety of the main entrance. It was understood that patients who were evacuated could still be accommodated in the hospital, albeit with some shuffling around.

The fire started around 1:00pm in the Kidney Dialysis Department (AUDRA), a building also containing patient wards adjacent to the Emergency Room.

Commandant Cleo Gumbs confirmed the origin of the fire was in a technical room that also contained equipment but declined to speculate if it was a technical fault or human error. He confirmed electrical equipment and machines were in the room.

“It was a very hot fire that caused a lot of smoke that spread through the wards,” he said. “I must praise the hospital staff for their quick reaction as the evacuation was well under way by the time we arrived.

“The fire was contained in one room and in the corridor, but extinguished fairly quickly with two hoses,” Gumbs added. “The worst part was the smoke that had permeated through the roofing.”

Reports of an explosion were not confirmed.

Gumbs disclosed the fire brigade had to respond to a fire in Orient Bay that started at the same time, but sufficient equipment and man power was still available for the hospital fire.

The hospital incident was of a sufficiently serious nature to warrant the presence of Préfète Anne Laubies, President Aline Hanson, hospital management and representatives from technical services who held an emergency to decide on an immediate course of action.

Préfète Laubies confirmed departments most affected by the smoke were General Medicine and Paediatrics and those patients were evacuated.

“The General Medicine ward cannot be used for a few days or a week, and the Emergency Department is also badly affected by smoke and for this reason the Préfet of the Region has decided to send us a medical team from Guadeloupe to assure that we have an adequate emergency response team in the hospital tonight,” she disclosed. “This is also to ensure we are well prepared because of the thousands of people expected to attend the Fish Day concert tonight.”

Laubies said the first priority had been to turn off the electricity, except for essential services such as the operating room, have a complete assessment and then turn on the electricity “zone by zone” in total security. The next objective is to fumigate the wards, to rid them of smoke odours.

She thanked the Medical Center on the Dutch side for kindly offering to have 10 hospital beds available if needed.

“I want to thank the hospital administrative staff, nurses and doctors, for their competence and know how. They were extremely reactive, as were the firemen and Gendarmes, to what could have been a disastrous situation.”