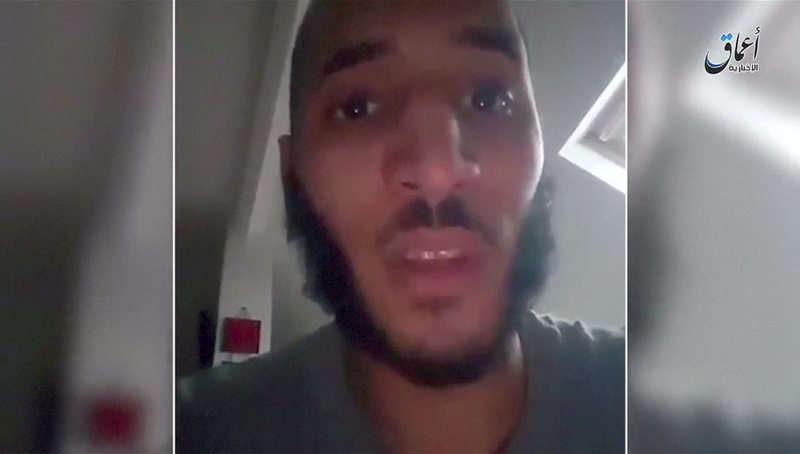 PARIS–A knife-wielding Islamist militant suspected of killing a French police commander and his partner at their home before being killed by police commandos had vowed five years ago to “hunt infidels” and been trained to slit the throats of rabbits.

Larossi Abballa, 25, a Frenchman who pledged allegiance to Islamic State chief Abu Bakr al-Baghdadi in an 12-minute video uploaded inside the victims’ home on Monday evening hours before he was shot, had been under police surveillance for years.
Conversations he had with fellow members of a jihadist cell back in 2011 show he was a violently outspoken Islamist radical, a judicial source told Reuters. Yet law enforcement officials said he presented no imminent threat.
In 2011, after he was arrested for helping Islamist militants travel to Pakistan, Abballa threatened an attorney for another indicted suspect: “I’ll have your head off”, a source close to the matter told Reuters.
In February 2011, he wrote to the deputy leader of the militant group saying, “We’ve got to start the job.” Asked by the Franco-Moroccan what he meant, Abballa replied: “Cleaning out the ‘kuffars’ (infidels).”
“We’re not going to wait until each and every one of us has been to the brothers (in Muslim countries) and come back to get started,” he said, according to the judicial source.
“Don’t be surprised if I leave the ‘jamaa’ (group) to go hunting infidels,” he said in another conversation in March 2011, adding he thought he knew where to get hold of weapons.
Yet Marc Trevidic, France’s leading anti-terrorism investigating magistrate until last year, said Abballa was just “one of those guys that the Islamist files are full of: unpredictable, a dissimulator. “He wanted to make jihad (holy war), that’s for sure… But in practice, at the time, apart from the bad company he kept and the occasional jogging to keep fit, there wasn’t much against him from a strictly criminal point of view,” Trevidic told the daily Le Figaro.
The Paris public prosecutor, Francois Molins, said Abballa had been under surveillance, including wiretaps, at the time of Monday’s attack in the town of Magnanville, 60 km (40 miles) west of Paris, but had raised no particular alarm.
In March and April 2011, he attended four physical training and indoctrination sessions in public parks in suburbs of Paris. But while two group members had already flown to Lahore via Brussels, “he stayed quietly at home in France”, Trevidic said.
Arrested in May 2011, he was sentenced in September 2013 to three years in jail, of which six months suspended, for helping Islamist militants go to Pakistan. He was released immediately, having served his full term in pre-trial custody.
During the investigation, several co-indictees testified that Abballa took part in a December 2010 training session in a forest that involved slitting rabbits’ throats, ostensibly to prepare them to slaughter sheep for the Muslim Eid holiday. “It scared me to think I might be teaching animal sacrifice to people who might use the technique to slit human throats,” the trainer later told detectives.
Prison officers reported him for “preaching radical Islam”, but he met his parole conditions on release until November last year and dropped off the law enforcement radar screen. His name resurfaced this February, when another anti-terrorism magistrate investigating a ring recruiting and sending fighters to Syria ordered his telephone tapped. But the wiretaps revealed no plan to carry out acts of violence.
That only came in the rambling video recorded in his victims’ home, after he had already killed the police commander and his partner. Explaining his motives in a mixture of French and Arabic, he told the French authorities: “You closed our doors to ‘hijra’ (emigration to Muslim countries), so we are opening the gates of ‘jihad’ on your territory.”