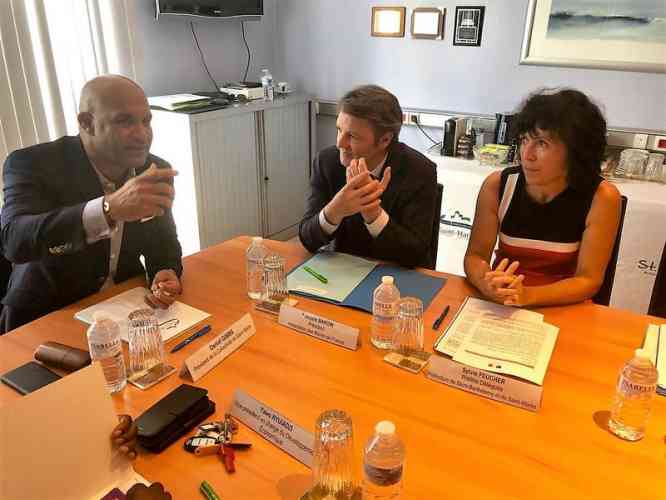 MARIGOT–A delegation headed by President of the Mayors’ Association of France AMF François Baroin recently visited St. Martin on April 12, in the context of the substantial donations made to the territory by the association in 2018 in the wake of Hurricane Irma.

The two associations had come to the territory to give a donation to the Collectivité of St. Martin, i.e. 105,871 euros collected by Martinique and 258,483 collected by Guadeloupe from the municipalities and inter-municipalities of France. These donations were used in particular for the reconstruction of schools.

Baroin’s visit included a one-to-one meeting with President Gibbs, and meetings with the Territorial Council and Préfète Déléguée Sylvie Feucher. He was shown a 15-minute film of Hurricane Irma and given a presentation of major risk management by Charlotte Terrac, who is responsible for that department. A tour was also arranged for him with visits to the eco-landfill in Grand Cayes, the vehicle recycling centre, Orient Bay and Grand Case.

President Gibbs warmly thanked Baroin for the financial donations, and thanked him on behalf of the school community. He also gave insight into how St. Martin will be better prepared in case a hurricane of such magnitude strikes again.

Preparations included increasing hurricane shelters from 500 to 1,700 persons, acquisition of new means of communication i.e. SMS alerts and a broadcasting station within the Collectivité’s crisis command headquarters, anticipating the aftermath by means of awarding a complete contract for the clearing of debris and clearing of roads, implementation with services of the State of a plan to secure the territory in view of the unacceptable acts of looting and violence that were observed after Hurricane Irma, and the issue of risk prevention.

The latter point is about the issue of weather data. Due to the island’s remoteness it does not have reliable weather data which is why the Collectivité is currently working on the installation of a meteorological radar on the island in a project presented within the framework of the INTERREG Caribbean Programme, and in cooperation with the government of Sint Maarten.