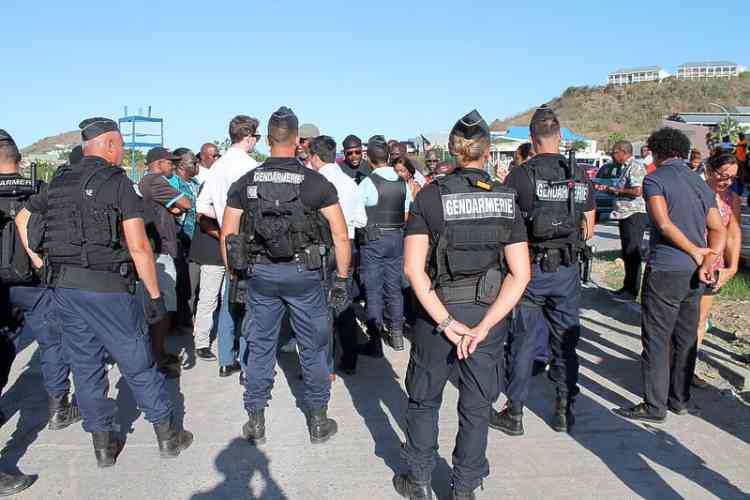 Gendarmes stand by as arguments erupt after a Guadeloupean union leader was not allowed into the meeting with Minister Annick Girardin in a Hope Estate restaurant. (Robert Luckock photo)

MARIGOT–Strikers involved in the indefinite general strike that started Thursday took advantage of French Overseas Minister Annick Girardin’s short visit this weekend to air their grievances with her as a state of tense civil unrest continued on the French side.

This was the Minister’s fifth visit, intended to assess progress with reconstruction on the French side as well as addressing other issues with President Daniel Gibbs, elected officials and business leaders. Subjects that were addressed included education, health, urbanism, biodiversity, and more.

“I’m here to listen to what everyone has to say before the State gives its opinions and decisions,” she said.

A meeting with union or collective representatives had not been planned for the Minister, but she was drawn in to the conflict due to another assembled gathering at the Agrément roundabout on Saturday. Strikers again dressed in red T-shirts had anticipated making contact with her at Hotel de La Collectivité for her scheduled meeting with President Daniel Gibbs until that location was changed suddenly to the Galisbay port.

Gendarmes with riot gear were again out in force and access to the port was prohibited. Minor disturbances and confrontations were quelled quickly. In one instance stones were thrown at Gendarmes when a truck was prevented from passing through to the port and the driver and occupants were removed from the cab, which resulted in Gendarmes retaliating by spraying the crowd with a substance that was not identified to disperse them.

Girardin listened to what Soualiga United Collective representative Lenny Mussington had to say before proposing a meeting with their delegation on Sunday. The meeting was held in Hope Estate at Maguy’s restaurant. A crowd of some 40 people waited to hear the outcome of the meeting, but it did not go according to plan, as Girardin refused to have a union leader from Guadeloupe be part of it, insisting she only wanted to dialogue with St. Martiners.

As a result, Soualiga United Collective did not take part in the meeting, which instead was held with a different group comprising Cédric Andre and Luc Wellington. The fact that the meeting had been split between two different groups did not go down well with an angry crowd when it was hoped for a united front.

“Our delegation refused to go into the meeting because the Minister wanted to choose which persons in our delegation will be sitting in the meeting,” said a Soualiga United representative. “She did not want a union person from UGTG in Guadeloupe, even though some of our strikers are part of UGTG. That’s not ethical and illegal. We are all one French people. That was a xenophobic statement from the Minister.”

Girardin told reporters at the end of the meeting that “she could meet Guadeloupean union leaders at any time, but in Guadeloupe.”

Asked about the Caisse Territorial des Oeuvres (CTOS) strike and the situation of the 16 employees, she said she had nothing more to add to the conversation other than what has already been proposed to those workers, adding that it was the Collectivité that had to handle the matter.

Andre told reporters he was satisfied with the meeting. “She was attentive and I feel she wants to do make things better for us. We talked about beaches, agriculture, health, the senior citizens, reconstruction, Reserve Naturelle and Consevatoire du Littoral, land expropriation, etc. We explained that the people feel oppressed by the State and France because of all the rules and this has to change.”

Added Wellington: “There a serious imbalance where the people are concerned. We are unable to function where the laws imposed on us do not take into consideration our culture. But I think she genuinely wants to help.”

A meeting was also held Saturday afternoon with Girardin, President Gibbs and Dutch-side Prime Minister Leona Romeo-Marlin to discuss a number of issues pertinent to both sides of the island.

“We talked about the preparation for the next Q4 meeting [France, the Netherlands, St. Maarten, St. Martin – Ed.] to discuss local subjects and this will probably take place in The Hague in September or October,” Ambassadeur Délégué for Regional Cooperation in the Antilles-French Guiana zone Jean-Bernard Nilam explained.

“Secondly, we talked about European funds as they apply to each side and the progress of the joint projects that have been implemented; namely, the joint wastewater treatment plant, the Belle Plaine and Simpson Bay Lagoon projects. Within the scope of Q4 will be issues of immigration, Customs, fighting fraud, and so on. There are 13 articles in the previous declaration that was made in June 2018 in Paris. All of those points have been reviewed to see how we can go further.”