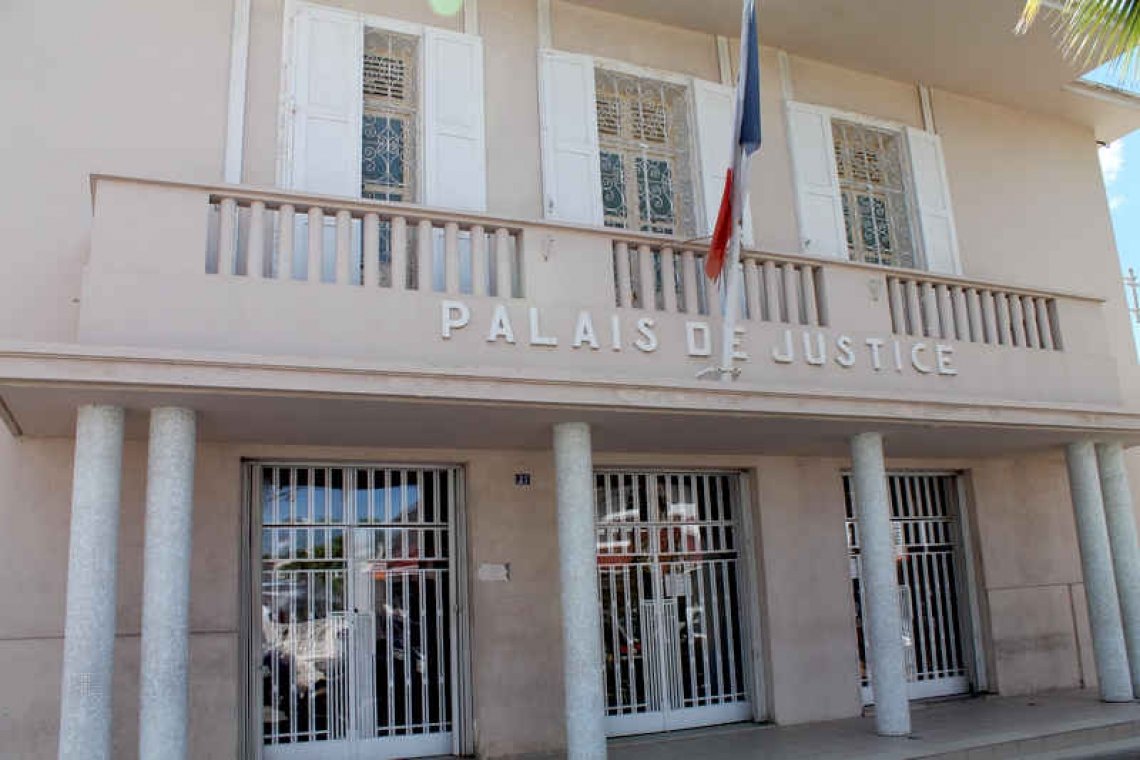 Courthouse in Marigot. MARIGOT—The French-side Prosecutor’s office has praised the collaboration between KPSM, the Philipsburg Public Prosecutor’s Office, and the Gendarmerie that secured the recent conviction of a known car thief.

St. Maarten-born Hakeem Hodge (26) was sentenced in Basse Terre, Guadeloupe, on July 28 to four years in prison for his involvement in car thefts. He was already convicted of car theft in 2016.  On July 25, a video surfaced of people from Sandy Ground in the early hours of the morning beating up a man who turned out to be Hodge with two passengers in a car that had been stolen two days earlier. The suspects were actively looking for vehicles to steal. The car owner recognised his vehicle which led to a citizen’s arrest and handover to the Gendarmerie.

During the interception of the stolen vehicle, the front passenger fled and the rear passenger was detained but subsequently cleared of any wrongdoing.

“Thanks to methodical and diligent cross-checking work of the Vehicle Theft Unit, with the assistance of technical and scientific police and the very good collaboration with KPSM and the Philipsburg Prosecutor’s Office, the investigation made it possible to make connections with many other facts, including the 10 vehicles stolen from a rental company in Sandy Ground on the night of December 24-25, 2019,” the prosecutor’s office said in its release.

“The defendant admitted his involvement in 15 vehicle thefts and one attempt since June 2019, and the latest on July 23 when five cars were stolen in the night. He explained he was part of a team based in St. Maarten as a driver for which he was paid US$1,000 for each vehicle delivered which in turn would be re-purposed by other members of the team for eventual resale.”

While this latest conviction is good news for law enforcement, it is not likely to have a great impact on eradicating car theft any time soon, as other car theft teams or gangs exist, and investigations are on-going concurrently. The investigation continues to identify accomplices and co-authors of this organised trafficking network.

According to the prosecutor’s office, these teams are well-organised in tiered structures, work quickly and efficiently, and communicate in Whatsapp groups. They have specialists who are called in at certain points of the process to transform the vehicle for resale; from breaking into the stolen vehicle and starting it, disconnecting alarms, re-spraying the colour, replacing the vehicle inspection number (VIN), replacing the keys, the car’s computer and ignition system etc.

In most cases the vehicles are stolen on the French side and taken to the Dutch side for processing. Unsuspecting clients will be purchasing a seemingly new vehicle, usually online, at a reduced price.

Commandant of the Gendarmerie Stéphan Basso indicated since the beginning of the year 240 vehicles have been stolen compared to 265 in 2019 for the same period. During the lockdown for COVID-19 there was an 80 per cent reduction in car theft on the French side. And in the immediate aftermath of Hurricane Irma many damaged cars had their computers and ignition systems stripped for later use in reselling stolen vehicles, the prosecutor’s office disclosed.