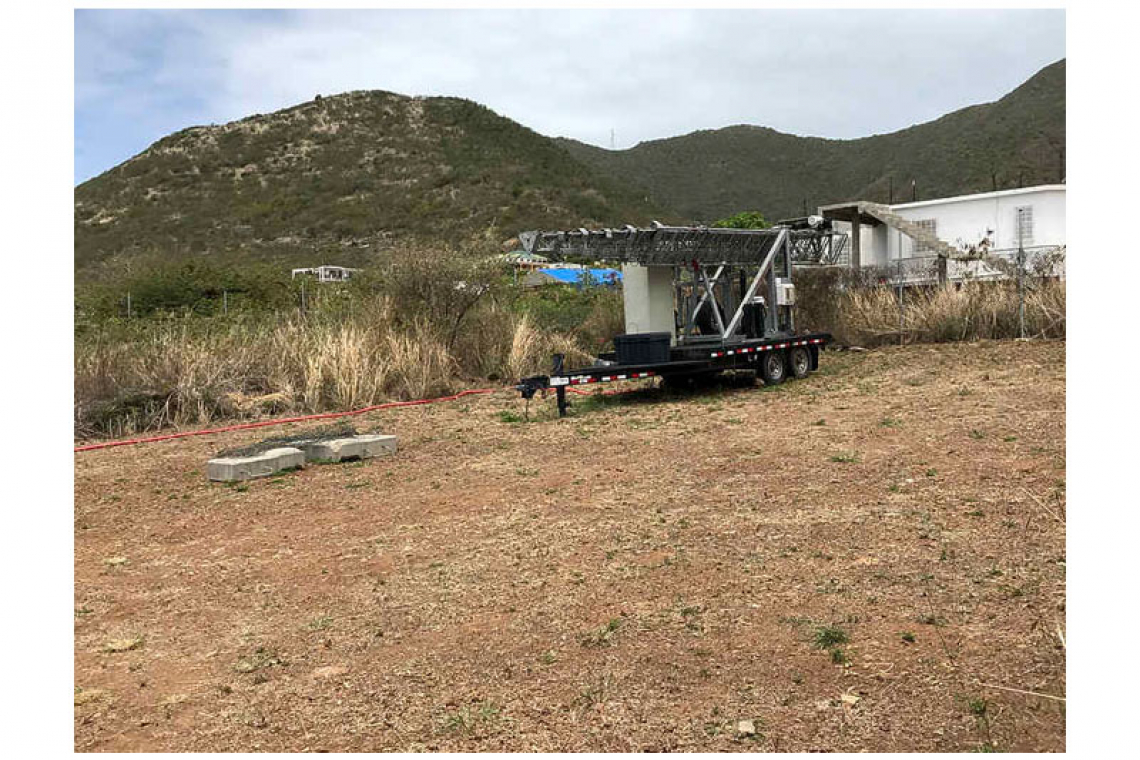 A cellular mast belonging to Dauphin Telecom sits on a trailer on a plot of land at Impasse Grand Fond, French Quarter. (Robert Luckock photo)

MARIGOT–A newly formed French Quarter association has questioned the motives of Dauphin Telecom regarding one if its cellular towers that is currently lying on a trailer on land adjacent to Impasse Grand Fond in French Quarter.

The association noticed on Monday that an orange cable had appeared leading from an electrical box on the road to the antenna itself, while it alleges two workers were seen working on the antenna on Tuesday.

Residents in French Quarter, citing health concerns, have long been protesting and questioning why French Quarter has to have so many cellular masts, around 18 in the district, including two near a school.

The association said the construction permit for this particular antenna on Impasse Grand Fond had been refused by Service Urbanisme in November 2019 and the antenna has been sitting there for more than a year. The rejection was confirmed by the urbanism department to this newspaper on Wednesday which noted, however, that a construction permit had been approved for Dauphin Telecom in Hope Hill, Orient Bay. The department further indicated it saw no evidence so far of a new application for a construction permit.

“We fear the company is getting ready to erect this antenna,” said Patricia Helliger, President of Together We’re Stronger French Quarter. “We met with the Préfet last week to talk about why there are so many cellular masts in French Quarter and he said he was going to discuss the matter with the operators concerned and visit the areas where they are located.

“We told him we are not against progress and new technology and we know cellular masts are needed for mobile phone service, but at least have a conversation with the community. Why can’t the masts be installed in the hills, away from the residents? They talk about consolidating all the masts onto one tower, but what is the news on that and when is that going to happen and where? We don’t feel safe in this community, so give us proof that we don’t have to worry about these masts.”

Responding to the latest complaint, Dauphin Telecom Director General Eve Riboud told The Daily Herald the cellular mast in question is a temporary mast and there is no plan to reapply for the construction permit and erect the mast in that location.

“Yes, my guys were working there. They were doing a regular maintenance on the mast which requires electricity,” she explained. “They will do that maintenance and then they will go. The mast is a temporary one which is only used to replace another mast or if an additional mast is needed for special events. But the mast stays on that piece of land because we have an agreement with the owner to store it there.”

Dauphin Telecom has said it will be rolling out 5G service in St. Martin at the end of 2021 or early 2022. According to

wirelesshealthfacts.com, on a question as to whether cell phones, cell towers, small cells and antennas are safe, it said radiofrequency energy from wireless devices and networks, including radiofrequencies used by 5G, have not been shown to cause health problems, according to the international scientific community.

To cite one example, the United States Food and Drug Administration (FDA) said: “Based on the FDA’s ongoing evaluation, the available epidemiological and cancer incidence data continues to support the Agency’s determination that there are no quantifiable adverse health effects in humans caused by exposures at or under the current cell phone exposure limits.”

And gizmodo.com said: “Concerns over the potential harm of 5G technology are overblown, according to two large reviews of research published by scientists in Australia. Both found no clear evidence that the type of radiofrequency energy used by 5G mobile networks poses any danger to human health.”

The association said it is not only concerned about cellular masts, but also other issues in French Quarter. It reminded that the Cultural Centre has still not been rebuilt since Hurricane Irma, there no activities for children, and there is no Post Office anymore. It also questioned the logic of closing down the Gendarmerie station in French Quarter and moving it to Hope Estate, leaving the district with less security and more crime. All these issues were brought up in the meeting with the Préfet.