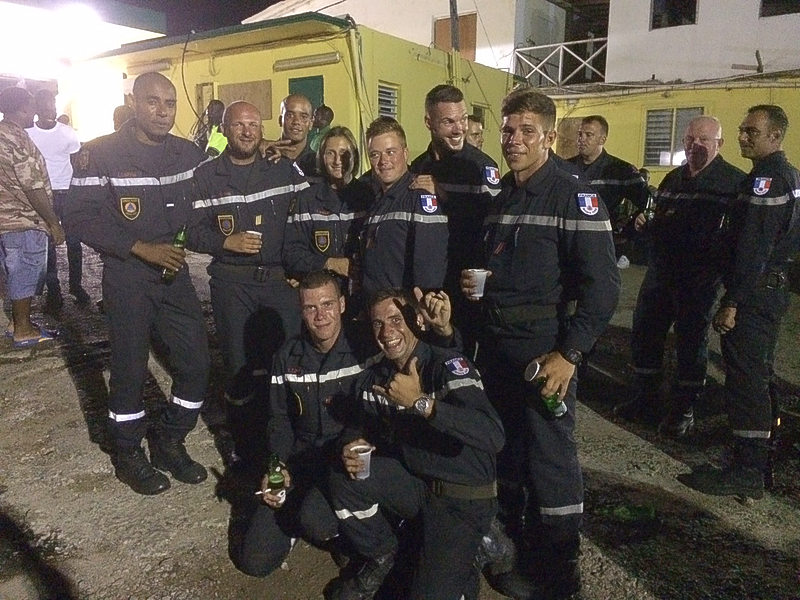 MARIGOT–The French Quarter community organised a party at the Best Buy Gas Station on Saturday evening for the French Securité Civile regiment from Brignoles as a thank you for its assistance to the district in the aftermath of Hurricanes Irma and Maria.

The 50-strong member regiment which was assigned to French Quarter was due to leave the island on Sunday having completed its mission. It arrived on island the day before Irma hit and was in position to render assistance immediately.
Platoon Commander Lieutenant Léa Condettes explained there are three regiments of Securité Civile, the headquarters of which is based in Paris, France. This one is Unite d’ Instruction et d’ Intervention de la Securité Civile No. 7 (UIISC7) from Brignoles.
“What we do is come in and clear the roads; we have chain saws and other equipment, tarpaulins, etc. and we can set up tents,” she explained. “It’s been an amazing experience here. The people were very friendly and strong.”
Capitaine Joel Leroy noted what a pleasure it had been for his platoon to have worked with the inhabitants of French Quarter who he described as “very good” people, “courageous and resilient.”
“I hope that your beautiful island will become even more beautiful than before. I wish you much courage in reviving the economy here,” he told the gathering of assembled local leaders instrumental in coordinating the clean-up.
Resident Jeanine Arnell, one of the recovery coordinators, noted a plan of action was implemented the day after the hurricane.
“After Hurricane Irma played with our minds, we said ‘where do we go from here?’ I came to the gas station and from there we separated French Quarter into sections, putting two people in charge per section,” she explained. “Those two persons had to report back to us at the gas station, our headquarters, about the needs of the inhabitants in those sections. We already had a list of the elderly, the disabled, those that needed tents, and so on. Slowly and surely the relief agencies were asking us how they could help. The Securité Civile was very instrumental in coordinating everything on a military level.
“On the second day after the hurricane one doctor here tended to 90 patients. We had insulin and medications stored at the gas station. Someone went to the hospital to get the medications needed. We also distributed food and water. We were highly organised. Even though the Securité Civile is leaving our work is just beginning because now we have to rebuild. Having them help us really made us feel better.”
“There was such a togetherness among all nationalities in French Quarter and I hope this community will continue building together. Every day we met at the gas station at 7:00am. Everyone had responsibilities and then at the end of the day we met back at the gas station to go over what was achieved,” added Arnell’s daughter, Gaëlle Arndell. She singled out a number of persons or businesses to thank who helped out with donating equipment, services or vehicles. She made a special mention of Polo for allowing the workers to take over his gas station as headquarters to orchestrate the clean-up.