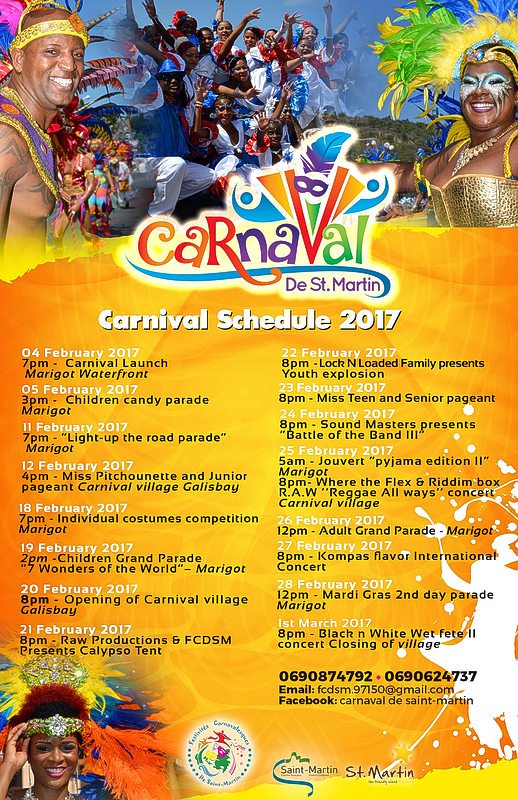 MARIGOT—Committee members of Festivités Carnavalesque de St. Martin (FCDSM) released the 2017 Carnival schedule at a press conference Saturday, at the Chamber of Commerce. Carnival will run from Saturday, February 4 to Wednesday March 1, 2017.
Vice-President Claudine Mingau, in her opening address, highlighted the involvement of all committee members who work actively and have volunteered for five years now with the aim of promoting and developing the carnival festivities of the French side of the island.
She reminded everyone that this cultural event is a real driver of economic development; an ideal marketing tool for the destination which requires the input of the entire population.
Mingau took the opportunity to extend the committee’s gratitude to all the institutions, private enterprises, revellers, schools and the media for their support during the last carnival season.
She disclosed the carnival committee intends to upgrade the carnival season with shows and innovative parades for the next edition. The Committee today is putting emphasis on early preparation and promotion.
The Committee’s longest-ever carnival season will feature 10 full nights of concerts and shows in the Carnival village with the cooperation of the island’s very own upcoming artists and international artists.
The 2017 edition is also scheduled to host new features such as the organisation of an individual costumes competition, a lighting parade, a pre-parade for the children on the theme of Candy, and finally a Calypso tent. The committee has also chosen to outsource two shows allowing a return of the popular Miss Teen and Miss Senior Carnival pageants.
“Though the carnival season is dedicated to the party spirit it also represents an enormous project which requires human resources of dedicated and available volunteers, a strong capacity for management and especially sufficient funds,” Mingau emphasized.
Treasurer Alex Pierre presented the projected budget for the organisation of the festivities which amounts to 262, 900 euros. He took the opportunity to issue an appeal to private enterprises and citizens to support the sustainability and the development of the Carnival of St. Martin by contributing financially and by being a volunteer.
In spite of the need for funds the committee presents a stable financial status, but will require complementary financing for some productions for flexibility, he added.
To motivate the whole population to participate in the festivities the committee decided to put the focus again on the marketing aspect. A new strategy was put in place which will consist of promoting the festivities from now until March 1. The committee plans to broadcast widely on the island all the information relative to all the festivities via all means of communication.
With this objective in mind, the committee has produced a promotional video which was revealed during the press conference. The idea behind the video is to bring awareness of the upcoming season, but also to demonstrate that Carnival is the affair of the entire island. This promotional tool will be broadcast via all social networks, on TV channels and on the Tourism Office website.
The committee thanked Great Music Movies-Picture for the editing of the video, but also everyone who contributed to the realisation of the video: Maelys Farlot, Shalyah Ferrol, Chico Rollan, Alberto Brooks, Gunslingers, Oxygen crew and Ruby Bute.
The press conference ended with the presentation of the beautiful candidates for the Miss Teen and Miss Senior 2017 carnival pageants.