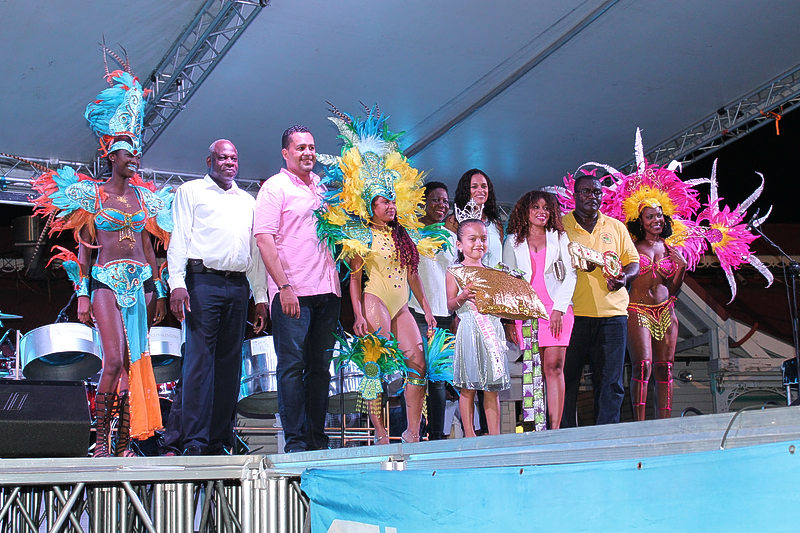 Saturday evening’s launch was opened by Kenyo Baly singing the St. Martin Song followed by the addresses of the speakers.

Jean-Philippe Richardson in his opening remarks noted how six years ago his dedicated team of volunteers took the Carnival in hand, when it was dying, brought it up to a respectful level and are determined to get it where it has to be with the help of sponsors.

“We are still crying out to all the big businesses in St. Martin that don’t contribute,” said Richardson. “You know who you are. Step up to the plate and join Carnival. Your businesses make money. Look at yourself in the mirror, and say it’s time to contribute to our culture.

He added: “We are thanking the troupe leaders who have been with us all these years, the parents for allowing their children to take part in the pageants, and the revellers who take part in the troupes. It’s not too late. Don’t look back and regret it. Join a troupe now and let’s make the Carnival greater than ever.”

Guillaume Arnell echoed the sentiments of Richardson. “We have to embrace this Carnival much more than we do actually,” he said. “The Carnival Committee is doing a tremendous job, but it cannot be a success without the people. It cannot be a success without the businesses, the contributors and finances. When you see how other countries pour money into Carnival because it’s a major cultural activity, we must step up to the plate in St. Martin.”

St. Martin Tourism Office President Jeanne Rogers-Vanterpool also gave a short address and President Aline Hanson left a message to wish the population a safe and happy Carnival, and for “young people not to overdo it.”

In addition to the Collectivité’s financial contribution to Carnival, Guillaume Arnell has also contributed three years in a row.

There were performances by Gunslingers, 2016 Calypso Queen Shakiya, Kenyo Baly, and the TG Band. The FCDSM committee members were also presented.

The evening was emceed by Jacques “Billy D” Hamlet.

A Children’s warm-up parade on the theme “Candyland” took place on Sunday afternoon with troupes gathering in Bellevue before passing down Rue de Hollande, Rue de La République and to the finish on the waterfront.

The actual Children’s Parade is scheduled for Sunday, February 19.